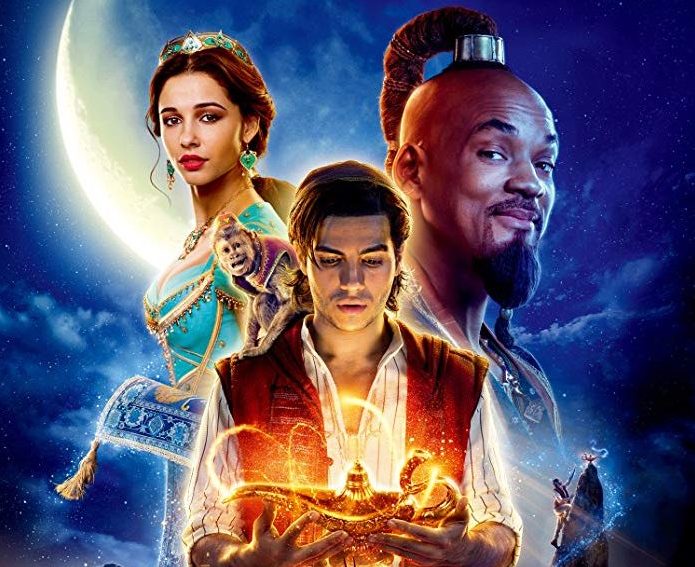 Before one ventures out to their local theater to witness the brand new Aladdin film, it is important to recall how the public felt regarding the reimagining of the classic animation way back on Feb. 10.

On this fateful day, Will Smith posted the now infamous still of himself as the Genie with the oh-so-eloquent caption, “I told y’all I was gon’ be Blue!!” This was of course in reaction to the intense backlash against the Entertainment Weekly cover featuring Smith as the genie only looking much more human. At this time– remember this was nearly four months ago– a majority of moviegoers shared a similar opinion: “that is not the genie.” Well, hindsight is always 20/20, and it seems that the one aspect of Aladdin everyone worried about is in fact one of the few positives in a stretched out, muddled rehash of a classic tale.

It is clear that the film is a product of two different times: the early 90s and the late 2010s; the 2019 rendition itches to bring back the original wonder. All within the span of one musical number the viewer can witness Will Smith beatboxing, hammer pants, and Robin Williams style improv comedy. In theory, this could be a fun way for the film to take inspiration from its source material while at the same time incorporating styles more familiar to modern audiences. In execution however, it leaves the film feeling lost in time, and only adds to the overall messiness that plagues its entire runtime. While leaps and bounds are made as far as Jasmine’s role, as she no longer just sits in an hourglass for Aladdin to save her, other aspects of the film seem to take things backwards. The script is stretched to its breaking point with countless unnecessary subplots and characters, and multiple performances just feel like weak impersonations of their animated counterparts, particularly Jafar and Aladdin.

It appears that while some of the actors and actresses were truly having fun with their roles, like Will Smith and Naomi Scott, others merely copied and pasted the personalities of the original versions. Mena Massoud attempted to translate the nervous but excited energy of Aladdin to live action, but in the end it just came across as immature and lacked the charm of Scott Weinger’s original take on the character. Even more appalling, Marwan Kenzari somehow took out everything that made Jafar such a force to be reckoned with, leaving an uninspired husk of his past glory. On top of this, without the viciously entertaining and witty dialogue from Gilbert Gottfried as Iago to complement Jafar’s foreboding presence, I found myself practically yawning every time the pair was on screen. Of course not every performance was this disappointing, as Naomi Scott delivered above and beyond what most were expecting and managed to make Jasmine more of her own character.

As I mentioned before, Jasmine has much more to do than sitting in an hourglass waiting for Aladdin to save her, and instead defines herself as an important aspect of the story with her extremely vital albeit somewhat confusing song “Speechless”. With this song and her fantastic performance throughout the film, Scott establishes herself as a diamond in the rough in Aladdin. Another interesting point I briefly mentioned earlier, despite being the one aspect the majority of audiences were worried about most, Will Smith as the Genie is another stand out in a film full of disappointments. While obviously not achieving the same level of perfection as Robin Williams, Smith had the keen observation that attempting a weak imitation would get him nowhere (I’m looking at you, Mena Massoud and Anwar Kenzari,) and that he instead had to take inspiration from Williams while at the same time establishing his own interpretation. This approach worked wonders, and Will Smith’s Genie spectacularly combines homage to the original 1992 film and an injection of his own personality to create a wonderful distraction from the rest of the film’s sluggish feeling. On top of Smith’s contribution to the character, the visual effects and musical number choreography ranged from adequate enough to downright spectacular.

One of the biggest sore spots in most early reactions, the CGI done for the Genie was surprisingly believable, or as believable as a towering baby blue humanoid figure could be. In other areas of the film however, the visual effects team truly took things to the next level and provided a stunning showcase of colors and spectacle which provided a much needed distraction from the weak script and acting in some cases. As far as particular aspects of the effects go, the city of Agrabah was absolutely breathtaking as the deep and vibrant colors shimmered in the hot Arabian sun. Despite all of this, the effects in every other part of the film paled in comparison to that of the various musical numbers, and more particularly the breathtaking “Prince Ali” sequence.

In the end, while there are positives to be reaped from this never ending stream of Disney remakes, they are severely outnumbered by the much more frequent negatives, including the toxic debate on whether these films are just quick cash grabs for the exponentially growing Walt Disney Company. As is par for the course in these debates, one will always find the arguments that these films “don’t do anything to the original” or are “just more content, and more is better,” but this presents the inherent moral quandary: what is the point of remaking something if it is not going to be better than the original? Well as I like to say, “if it ain’t broke, don’t add unnecessary characters and subplots that only act to bring down the quality of an already fantastic film.” While not the most heinous example of just making things worse, the 2019 film Aladdin certainly does not try very hard to make things better, and that is exactly what it will be remembered as: nothing terrible but nothing remarkable, just the same as every other live action remake.