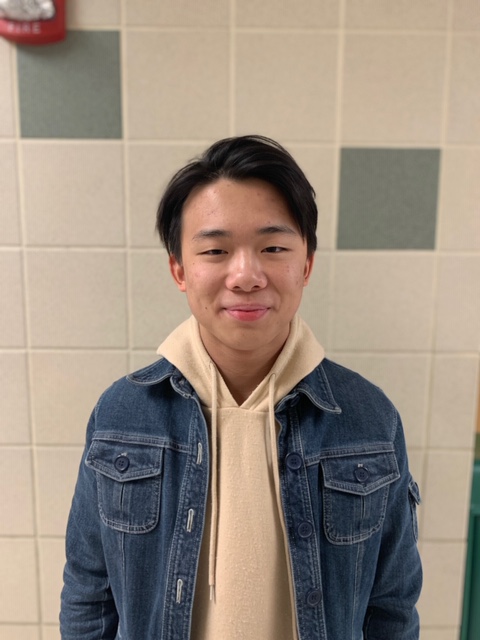 Never wanting to be a downer, senior Martin Liu roams the halls of Emmaus High School with one goal in mind: to spread positive vibes to everyone he comes across.

Liu is best known for his antics as a member of the EHS marching band. Parkland Hate Week, a time-honored EHS student tradition, is a week long bashing on rival school Parkland High School. Despite the trend, during the football team’s final home game, and last year during their deep playoff run, Liu could be found in the opposing teams’s student sections, with headbands reading #Parkand/Eastonloveweek. Liu saw Hate Week as an opportunity to make new friends rather than create further divisions.

“Well I got home and I saw that the schools had a ton of Twitter beef,” Liu said. “I was just like, ‘this really ain’t right.’ I went over and it was actually a fun time. They were just really chill. At the end of the day, it’s all just a bunch of upper middle class white kids, so why should we hate one school and not the other?”

Even when things aren’t going Liu’s way, he always finds a way to keep a positive outlook every day.

In the summer of 2018, Liu was hospitalized for a seizure and his doctors quickly suspected that he might have a brain tumor. Liu found the whole situation amusing, posing a picture of himself in a hospital bed with the caption “I might die before im 18. I love you all,” with a smiling emoji to close.

Liu says he didn’t want to make fun of the situation– he wanted to assure everyone that he would be okay.

“At the end of the day, I mean, we’re all going to die,” Liu said. “I wouldn’t want to die sad and crying. Who would want to do that? I mean everyone was texting me, and it was just a way to make sure they knew I was okay.”

What can clearly be seen through all of his interactions, and antics in school and on social media is that Liu is always looking for a laugh with friends.

That it is his main purpose in life.

“People like me,” Liu said. “I don’t want to make it sound like I’m one of those kids who needs to be liked, but everyone likes to have friends. I’m never looking for beef with anyone. I don’t have any enemies, and I love the fact that I can call almost everyone a friend.”