Earth Day Goes Digital: How COVID-19 is impacting the holiday 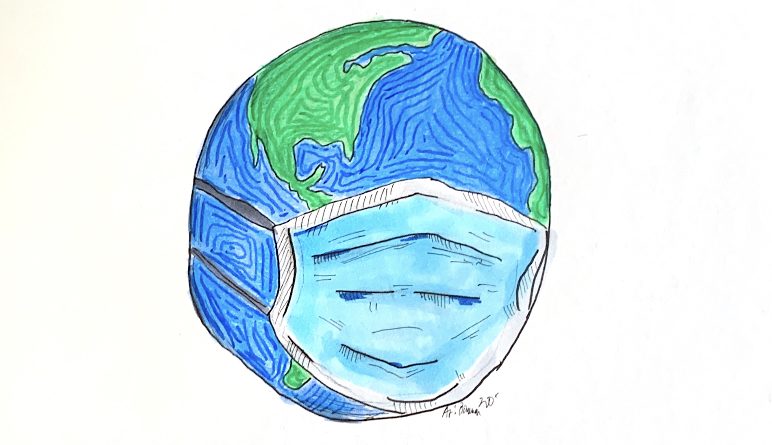 April 22 marks the 50th anniversary of Earth Day. But because of implications from COVID-19, the day promises to be different than ever before.

According to Earthday.org, the first Earth Day took place in 1970, when over 20 million Americans gathered together to demand a change in the treatment of the planet. Gaylord Nelson, the founder of Earth Day, organized the event after a massive oil spill in Santa Barbara, Calif. in 1969. Support for the movement united people from all different backgrounds, and the event was met with success. In the United States, the Clean Air, Clean Water, and Endangered Species Acts were passed. Additionally, the Environmental Protection Agency was created, and many other countries soon passed similar laws.

Following the tradition of the first Earth Day, April 22 is typically a day when people gather to protest the environmental issues important to them. For some people, the most pressing issue is the use of fossil fuels instead of renewable energy sources. Someone else could be more concerned about deforestation and the various animals that lose their habitats every day. Another person might believe that advocating for using materials that are reusable or recyclable instead of ones that are thrown out after just one use takes priority. Honestly, it doesn’t matter that people might not agree about which issue should be dealt with first. All of these, and many more, are critical issues that need to be recognized and addressed.

While people’s beliefs on what environmental issue is the most important differ, so does the way people take action. People can set goals for themselves, such as taking shorter showers to conserve water or switching to renewable energy sources. Some people make a special effort to clean parks or other public places by cleaning up trash. Other people make signs and join protests to raise awareness of environmental issues and inspire action in people or companies.

Though everyone has different opinions and courses of action, everyone has the same goal: to make the Earth a cleaner, better place for everything living on it. No matter how large or small, every step that people take towards this goal has an impact.

Due to COVID-19, Earth Day cannot be celebrated the same way that it has been in previous years. However, that does not mean Earth Day will not happen. In a March 17 press release posted on Earthday.org, Earth Day Network announced this year will mark the “first Digital Earth Day, a global digital mobilization on April 22 to address the most urgent threats to people and the planet.” Hashtags such as #EarthDay2020 and #EARTHRISE will be utilized, as well as virtual protesting and social media campaigning, to advocate for change.

Kathleen Rogers, President of Earth Day Network, encourages everyone to take action but puts people’s health and safety as the number one priority. She hopes that people will choose to call for change online instead of in-person.

“We cannot shut down. Instead, we must shift our energies and efforts to new ways to mobilize the world to action,” Rogers stated. “…We hope you will stand with us as we fight for a safer, healthier, and more just future for all.”

Even though the world is in an unprecedented situation with COVID-19, the environmental issues addressed during Earth Day are just as pressing as ever. The world is quickly approaching the point where the damage caused by people is irreversible. For years, scientists have been warning about the lasting consequences of society’s choices. Some people have heeded this call for change, but too many people still do not recognize the consequences or choose to ignore them because it means sacrifices they deem too great.

Yes, repairing the damage done to the Earth will be difficult, and fixing all of it may even be impossible, but people need to take responsibility for their actions and correct their mistakes. It will not be an easy or simple path, but the stakes are too high for people to not change. The Earth is our home, and we have no alternatives if we treat our home so poorly that we destroy it.

Difficult sacrifices and significant changes to the way people live and how society operates will be necessary. People will need to make changes to their lifestyle that will be challenging, and companies and people might need to sacrifice money to become more environmentally friendly, but it will be so worthwhile in the end. That is, after all, the whole point of sacrifice: giving up something good for something better. And what could be more important than preserving the home we, and so many other plants and animals, live on?

Each and every one of us has a duty to ourselves, our future, each other, the Earth, and every other living thing that shares our home, to take action to clean and protect it. Changing an entire life’s worth of habits with negative impacts on the Earth will be a daunting task, but take it step-by-step. Don’t try to change everything in one day; that will be too overwhelming. Start small– even simple actions like carpooling or using a reusable water bottle can make a difference. When more and more people start taking even just some simple steps to a more environmentally friendly lifestyle, those actions can add up and make a large difference. Then, after starting with the smaller, easier changes, move on to the more difficult ones. Over time, it will become easier and easier to make choices that are better for the planet.

While making huge changes right away might not be necessary in all cases, it is critical that people act now. There is too much change that needs to occur, and so little time before it becomes too late to save the planet, to wait any longer. Some large changes will need to occur now, or very soon if there is any hope for the restoration of our planet. All of us can, and need to, act now to make a difference in preserving our home.