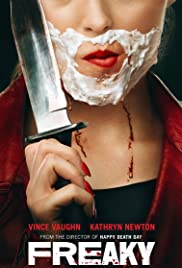 In a year as chaotic and unpredictable as 2020, Vince Vaughn acting like a teenage girl still might be the last thing one would expect. Yet somehow, it’s exactly what many people might be looking for from this year.

While movie theaters may have returned, new releases have not quite followed. A majority of films theaters play today are classics being rereleased to stimulate profits. Despite this, one ounce of normalcy in the film exhibition industry has arrived with the release of Freaky. Produced and directed by the same team behind the rather successful Happy Death Day, the film can essentially be boiled down to Freaky Friday as a horror comedy. To one moviegoer, the film will seem like a harmless, ineffectual adventure for younger audiences to enjoy and quickly forget about. On the other hand, many audience members will simply see it as an uninspired cash-grab which abandoned all hopes of uniqueness after the basic concept was established. Oddly enough, everyone would be correct in this case.

First and foremost, any good horror film (or at the very least most of them) should have a likeable main character; one for the audience to empathize with and root for the victory of. With Freaky, from the very beginning Millie Kessler, the protagonist of the film, is established as the quiet girl in school. Never shy of stereotypes, the film also features her two best friends, Josh and Nyla, with whom she spends a majority of her time, thus forming a classic onscreen friendship reminiscent of the likes of Mean Girls. This dynamic between the three protagonists provides some of the most enjoyable parts of the movie, as it seems the director, Christopher Landon, allowed his young actors to take some creative liberties and have fun with the script. This excitement reaches its peak with the onset of the second act, and the inciting action of the body switch between Millie Kessler and the Blissfield Butcher.

However, if one wishes to talk about having fun with regards to the film, it would be a gross disservice to not mention the film’s antagonist, the aforementioned Blissfield Butcher, portrayed wonderfully by Vince Vaughn. Remaining one of the most simultaneously well-known but underrated actors of today, Vaughn is allowed to fully let loose in this film when the body of his character becomes the vessel for the young teenage girl protagonist. Complete with an unusually feminine run for a man built like a brick wall, Vaughn plays the role of a young woman extremely well, providing some of the funniest moments in the film.

Despite the electric fun the actors seemed to have during production, the film suffers from major structural issues. Possibly the most frustrating of all, Freaky often finds itself stuck between two different goals: satirizing the common teen horror or being an example of that exact genre. While one minute there may be a clear jab at one of the many tropes of the modern horror genre, just a few moments later the film will fall into the trappings of another. At its best, this indecisiveness simply comes across as boring. At its worst, it makes the film downright insufferable at times, and audience members will likely find themselves aching for another glimpse at Vince Vaughn attempting to use modern teenage girl slang.

In addition, while the first act is a vibrant introduction to the film, with flashy title cards and upbeat character establishment, the rest of the film suffers greatly from pacing issues. When the first third of a film moves at the perfect pace and features genuinely well crafted shots, it’s even more disappointing when the rest of the film doesn’t follow suit. By the halfway point, many audience members will likely be discreetly checking their watches and sitting in amazement by the fact that only 45 minutes have passed.

In the end, Freaky is exactly what you would expect based on the trailers; an uninspired husk of a comedy which is only enjoyable thanks to the chemistry of its lead characters, and the comedic expertise of Vaughn. Countless attempts to say anything of substance regarding the horror genre fall completely flat. Instead, Freaky will go down as the film in which Vince Vaughn prances through a field like a 17-year-old girl. Frankly, all things considered, that is not the worst way to be remembered.