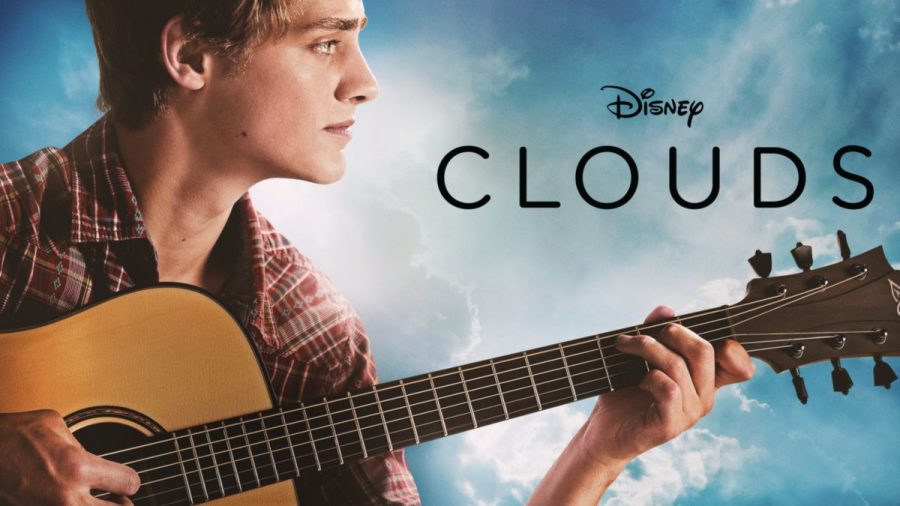 It is rare in life when truly fortunate things come out of dismal circumstances, but not impossible. Especially this year, a light-in-the-dark situation is precisely what some people need. Although heartwarming, the story of Zach Sobiech may result in a few tears.

The movie Clouds, released in October of 2020 on Disney+, is based on a true story about a 17-year-old boy diagnosed with Osteosarcoma–a type of bone cancer. In the fall of his senior year, Zach Sobiech learns that his cancer turned terminal. With an estimated six months to live, he attempts to live life to its utmost potential and pursue his dream of songwriting.

Director Justin Baldoni (Rafael in Jane the Virgin and the director of Five Feet Apart) found his inspiration for the movie in Laura Sobiech’s book, Clouds: A Memoir. Zach’s mother started writing the book three years after his death, taking about 12 weeks to complete. The film follows the major events in Zach’s senior year of high school: from his diagnosis to the day of his funeral.

The film excels in music, actors, and portrayal of core values in the life of Zach Sobiech, but it lacks a smooth timeline. The result: viewers endure a tough emotional rollercoaster.

The writers do an incredible job by having the cast sing original compositions written by Sobiech before he died. Zach Sobiech and his life-long best friend, Sammy Brown, decided shortly after his diagnosis that they wanted to release an album, acting as Zach’s goodbye to his family, friends, and the world. Sincerely reflecting on their genuine and goofy relationship, the pair named their band “A Firm Handshake.” Throughout the film, the pair engaged in a couple “firm” handshakes, exemplifying the pride they take in their band and friendship. A majority of the songs from the album were seamlessly incorporated into the film, blending well with context. The highlight songs of the movie included Fix Me Up, Coffee Cup, Blueberries, How to Go to Confession, and the viral song, Clouds. Sung by the cast, the songs sounded extraordinarily similar to those of the original duo, causing audiences to forget they watched a movie instead of a live performance by the band themselves.

Similarly, the actors chosen to play the roles of Zach and his family and friends hold remarkable resemblances to the people themselves. Moreover, the actors’ performances and commitment to their roles is nothing short of commendable.

Fin Argus (Zach Sobiech) manages to perfectly portray how a happy, fun-loving teen slowly weakens from illness. Over the several months he was suffering, Zach never lost his bright personality and light sense of humor, even in the darkest moments. Argus plays the role organically and authentically. Sabrina Carpenter (Sammy Brown), Madison Iseman (Amy Adamle), Neve Campbell (Laura Sobiech), and all of the actors cast as Zach’s siblings truly embody their parts, making the movie both authentic and heart-breaking.

The film captures the overall essence of Zach’s life very well. Almost all of the crucial events that occurred over the months Zach was sick are included in the film and portrayed skillfully. In an interview with ABC, Zach’s mother, Laura Sobiech expresses the production as a whole is 80% accurate. She explains that the emotional relationships between the characters are depicted as authentic as they truly were. The 80% also originates from the fact that the core values of Zach’s story do not alter: live life to the fullest and surround yourself with the people you love. Zach and his family and friends found this concept critical in Zach’s last months and found joy seeing it shine through in the film.

Of course, it is understandable when directors and scriptwriters have to adjust the timeline of a true story slightly if it means a smoother production. But in this case, it may have done just the opposite.
The timeline underwent alterations to ensure the foremost events since Zach’s diagnosis would fit into his senior year. The main events added to the film include; Zach’s diagnosis, Clouds going viral, large-scale performances, etc. But, the flow of the film feels as though they were sloppily glued together without transitions. Gary Goldstein from The Los Angeles Times explained that the “scenes tend to unfold as if being ticked off a list… rather than an organically woven retelling.” The stop and go nature of the production fell flat of the memorable and significant expectations for the film, leaving viewers frantically playing catch-up.

Because the movie focuses solely on the vital experiences in Zach’s life, the writers fail to include smaller, key moments in the story. After Zach’s terminal diagnosis, the movie captures the immediate response of Zach’s parents but it neglects to cover the reactions of his best friend, Sammy Brown, and his three other siblings. These moments need to be shown to audiences so they have a clear understanding of the relationship Zach has with his loved ones. Furthermore, Zach uses crutches throughout the entire production but never is there a moment that addresses how he broke his leg and came to need them. After the band establishes themselves as A Firm Handshake, Zach and Sammy share clasps as a symbol of their passion for music. But viewers are ultimately left puzzled by the odd name as the writing falls short of background knowledge surrounding its origin. There is little information published on the internet about the above missing information, making it more of an issue that these details were not included in the film. By the end of the movie, spectators are unsatisfied and yearning for more context that was simply overlooked.

The film has its fair share of devastating moments balanced by heart-warming scenes, but the timing of how these events play out is exhausting. Watching the film feels almost as though the light and dark scenes are in a constant battle; neither wins, and the audience loses. Once a devastating event plays out, it is almost immediately combated by good news that takes the mood extraordinarily far up–only for it to drop back down dramatically once another sad event takes place. The film incorporates both tragic and uplifting moments of Zach’s final months, but it can be difficult to decide whether or not to feel joy as an audience member, knowing that another heart-breaking event will soon follow.

Overall, Clouds serves its purpose as an ode to Zach Sobiech and a heart-warming story in a time of crisis. It is a perfect reminder that there is always going to be a silver lining in devastating times, it just needs to be discovered. In the end, the movie is a well-wrapped package of music, acting, and portrayal of values. Even with its faulty timeline and dramatic emotional spectrum, the genuine lesson of the story shines bright throughout the film–no one is promised tomorrow, so start living today.