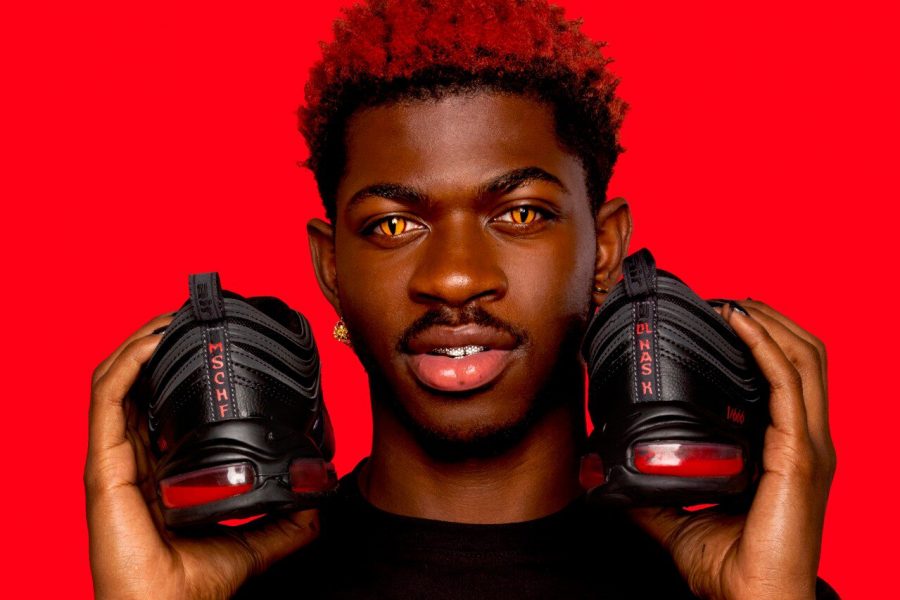 Being a part of the LGBTQ+ community, unfortunately, brings along many religiously affiliated people who will say that queer people are going to hell by simply being who they are. Somehow, these same people are getting mad when openly gay artist, Lil Nas X, finally decided to go.

Nas’ fame flourished in 2019 when he released his first single, “Old Town Road”. Dressed as a stylish, glamorous, Gucci-themed cowboy, “Old Town Road” pulled a whopping 8.3 million song units, staying at number one in the U.S’s charts for 17 weeks straight and breaking Billboard’s record for longest-running song of all time.

Silent for almost a whole year, the pandemic throwing a wrench into lives across the world, nothing could have prepared us for what Nas was about to drop. Literally, drop. On March 26, 2021, the music video and song “Montero (Call Me By Your Name)” unleashed chaos into not only the world of music but society itself.

In the music video, complete with an explosion of amplified colors and pastels, Nas creates a world of fantasy-like wonder; Montero. Playing many different roles including a human serpent and a pink-wigged prisoner, Nas ascends upwards into an explosion of bright light, white angel wings aiding him up into the sky.

Questions as to why this music video received so much backlash were out of mind. That is until the beat drops, and Nas is falling onto a CGI pole leading straight down into the depths of hell. In full glam he meets the devil upon arrival, proceeding to give the man in red a provocative performance.

It seems as though Nas’ lap dance on the devil was more worth bashing on news media outlets than the latest mass shootings, or the life-threatening restrictions being placed on transgender youth rights. Nas responded to the criticism of his music video by tweeting, “there is a mass shooting every week that our government does nothing to stop. Me sliding down a CGI pole isn’t what’s destroying society.”

Conservatives flooded social media with backlash mere minutes after Nas’ descent claiming that he was corrupting their children and “teaching them how to sin.” However, Nas wasn’t going to have any of it.

The artist clapped back soon after, tweeting, “I am an adult. I am not going to spend my entire career trying to cater to your children. That is your job.”

“It is still disgusting to see Lil Nas X acting as though he is having intercourse with Satan on television,” said Burns in an ABC News Nightline interview.

Other news broadcasting stations such as Fox News also sported headlines with Nas’ name in them once the artist released his proclaimed ‘Satan Shoes’ in support of his new single.

These black and red shoes, based on Nike Air Max 97’s design, are complete with a liquid squishing sole claiming to have “a drop of human blood” in them. However, this wasn’t what sparked the religious backlash.

In collaboration with artist MSCHF, “1/666” and the Bible reference “Luke 10:18” were imprinted on sides of the shoe, along with a single gold pentagram decorating the laces. Each pair was priced at $1,018 each, and the 666 pairs that were made sold out within minutes.

Despite the copious amounts of backlash for his work, Nas was able to drop below it all. Along with promoting his new single on Twitter, retweeting fan support, and responding to criticisms, Nas calls out all the homophobes.

“I spent my entire teenage years hating myself because of the s— y’all preached would happen to me because I was gay.” Nas tweets, “So I hope you are mad, stay mad, [and] feel the same anger you teach us to have towards ourselves.”