Tristan Schmidt: looking forward to states as well as nationals 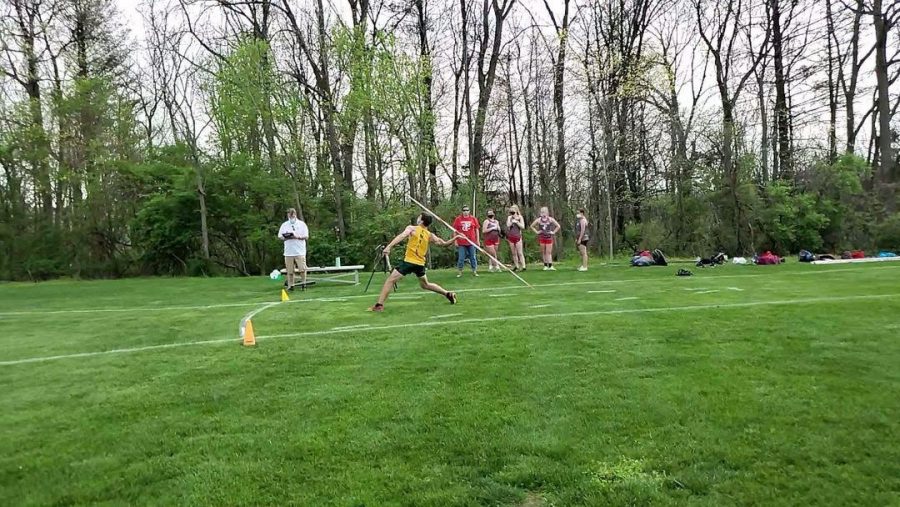 Tristan Schmidt continues to shine in throwing javelin for the Emmaus track and field team in his senior year.  Starting to throw in his freshman year, Schmidt has come a long way to place second in districts this season with a throw of 193 feet.

Training every day to throw javelin has not gotten in the way of his passion for running, as he is also a member of the 4×800 relay team and the Emmaus cross country team.  Schmidt looks to continue to throw at Penn State, where he will major in kinesiology.

Stinger: Why did you start throwing javelin?

Schmidt: My older brother threw as a freshman, so I was introduced to it through him.  There was another kid that went to Nazareth that I saw throw when I was a freshman, and I saw how much further he threw it than everyone else.  I thought that it would be amazing to get to that level one day.  That is what made me pursue throwing javelin further, after my brother got me started.

Stinger: What is your favorite thing about throwing javelin?

Schmidt: Once you release the javelin, your work is done.  You watch it fly for three or four seconds and then you are done.  Unlike running, where you have to run the whole time, you have a small window to do it right, and after that you can’t change what happens.

Stinger: What is your training regimen to prepare for meets?

Schmidt: I do a lot of visualization leading up to meets.  I also do a lot of technique work since the event is pretty much all technique.  Strength training is also a big part of my training that helps me increase the distance in my throws.  The javelin throw is so complicated, but it all happens so fast.  I work on the different aspects of my form and try to put it all together.

Stinger: How has COVID-19 impacted your season?

Schmidt: We have had quite a few meets.  I can’t complain that we did not have a season, because last year there was not a season at all.  Wearing masks has not impacted my season too much, but it has not been fun.  Throwing the javelin, it does not make the biggest impact on my performance, so I was able to overcome it quickly.

Stinger: What are some struggles that you have faced throughout your season?

Schmidt: I got injured in our third meet, which was very unfortunate.  This kept me out for about a week, but I got that figured out and it was not a huge deal.  The injury reduced throwing distance by about 30 feet for three meets.  I made a quick comeback in my numbers and got back up into the 190 range.  In the long run, the injury did not have a massive impact on my season.

Stinger: What are your expectations for the rest of the season?

Schmidt: Ideally, I would like to win states.  There is another thrower that is throwing in the 220s, but it is not predictable how consistent he can be.  I feel as though I have a good shot of getting a medal, but I am certainly hoping to win.  I was also nominated for nationals.  That is a massive honor and I hope to perform well there as well.

Stinger: What is your favorite memory from this past season?

Schmidt: Running on the 4×800 team was the thing I enjoyed the most.  I am a thrower, but I also like to run.  Being on the relay team was fun, because you always have the support of your team behind you.  It was a change of pace for me that kept the season fun.