Nate Garcia: drawing his own path for success 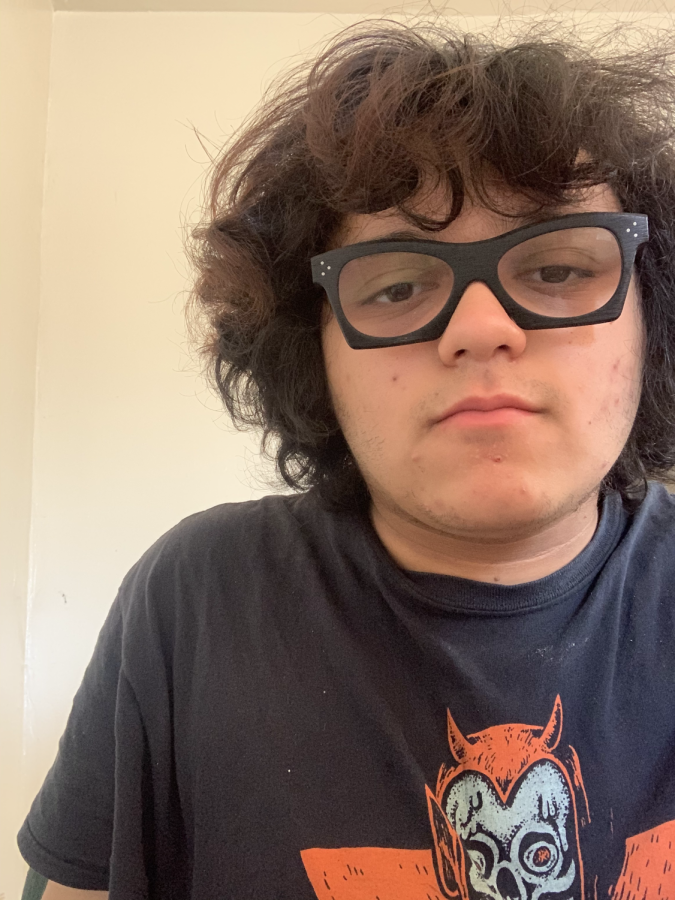 In high school, Garcia served as an illustrator for The Stinger. Photo courtesy of Garcia

Ever since Nate Garcia was a first-grader, he knew he wanted to go into art, but he never imagined himself as a cartoonist living in Philadelphia.

Inspired by his teacher’s stories back in 2008 to him and his classmates, he began creating cartoons from those small tidbits of his teacher’s life. Thirteen years later, he is a cartoonist who has been recognized by the likes of George Lopez. After cartooning for The Stinger throughout his years in high school, Garcia applied and got into a prestigious art school in Philadelphia where he believed he could further his craft. He quickly realized that he could achieve his dreams without a degree and four years of debt on top of him. So, with the money he saved up for college, he bought himself an apartment and began his dream.

Even when Garcia was little, he always had a fascination with the art that surrounded him, specifically his childhood favorite movie, Toy Story. It now makes sense that the main character in his comics is a cowboy named Alanzo Sneak. Taking this inspiration to his classroom, he began to make comics for his teacher.

“I used to draw when I was little and I would watch Toy Story like every day, five times a day, and just draw in front of the tv,” Garcia said. “Then in first grade, I would make little scenes for my first-grade teacher. She would tell us about different stories about her life [and] I would come to school the next day and I would give her a comic about what she talked about.”

“I’ve fallen in and out of love with the type of art that I’m doing now,” Garcia said. “There were times that I wanted to be just like fine artists like a painter, but I would just get so bored with that. I just think that it’s hard to stay interested in one picture for so long. And there’s times where I wanted to do maybe fashion art and stuff. I was pretty misguided with what I wanted to do for a really long time. Even though comics and cartoons were still in the back of my mind, I never really gave them the attention that you know, they needed until more recently, and now I’ve pretty much decided that that’s what I want to do with my life.”

High school hopes to set students up to be prepared to go into college, but before the school year started, Garcia realized that college life was not for him. Garcia felt that when making comics, “you really just have to learn by doing it,” so he used his college fund to get an apartment and started drawing pet portraits in his spare time to make money.

“I got to the point where I was going to sign my loans for hundreds of thousands of dollars,” Garcia said. “And I was like I don’t really think I should be doing this because I already have this money saved [and] I’m going to be in the same exact place in four years except I’m going to be in debt so why not—why would I want to start my life out in the red.”

Deciding not to go to college is a big decision for high schoolers, but Garcia claims he has no regrets because he is where he wants to be now.

“This is one of the few times where I would probably say I don’t have much regrets because I [didn’t go with] the thing that I wasn’t confident with which was not going to college,” Garcia said. “So I think if I went to college, especially during a pandemic, I would have been so regretful, and even if I dropped out in the first semester while it’s like now I have to pay for a semester with money. This is like the doable thing for me. If I was trying to be in college right now and still trying to have to pay my rent that would be very hard.”

Inspiration for Garcia has come from watching others around him work on their art and the cartoonists before him that he looks up to.

“I think that a lot of peers of mine, seeing their artwork really inspires me,” Garcia said. “It’s hard to say specific people that are doing comics, […] but probably just comic book people like Daniel Clowes and Robert Crumbs.”

To come into the style he has now, Garcia has taken a look back at his former job as a caricature artist that taught him a lot about being an artist. For four hot summers, he worked at Dorney Park as a caricature artist and although he said it was a formative time for him, he also felt it to be “mentally disheartening” at times.

“Because you have to learn how to draw someone in front of you in life, not a picture like in real life, 3D, and you can’t sketch it out, you have to go marker to paper, just you know, automatically,” Garcia said. “Doing that for four summers, I think, really helped to give me confidence with art,” he said. “…you really quickly learn that [the customers] are not going to tolerate you if they don’t like the drawing and a lot of that is that they’re maybe they’re offended and also a lot of that is probably because you’re not very good at drawing and so, I learned how to be better so much at that job.”

To write the storylines for his cartoons, he takes from the television shows he watches, admiring the enjoyability and dependability of the storylines. And sometimes as he goes along, the storyline for his comic comes to him.

“I think a lot of TV-like sitcom storytelling, television cartoon storytelling, and a lot of stuff where I’m just drawing in my sketchbook, and I don’t necessarily want to make a comic but I draw something and I just want an excuse to draw that in so many different ways,” Garcia said. “[And with sitcoms] it hits the pleasure center in your brain because nothing ever changes, so I don’t really like them from a quality point of view but just from how reliable they are I guess, you pretty much always know what is going to happen. Shows like How I Met Your Mother, and The Simpsons and stuff like that.”

Garcia admits that sometimes he struggles with the storyline of his comics.

“The biggest challenge is always writing the story, because it’s really easy to get caught up in how things look that you forget that somebody actually has to read this,” Garcia said. “And so a lot of my early comics are kind of unreadable because they’re just what I want to draw, so the most challenging part is finding the balance between ‘what do I want to draw’ and ‘what makes the story work,’ because those two things are just as important. You can’t have one without the other. So, I would just say making a good story is really hard.”

Working on a comic book can take many months grueling over the art and storyline, worried that the result will not turn out the way Garcia might hope. At the same time, he describes it as being “just like heaven, just losing yourself in that piece of paper” because, in the end, he ends up with a whole comic of which he is proud.

“To finally hold it and see how it looks and read it through like an actual book and that’s really the best part for me is when it’s done and you’re just looking at it,” Garcia said.

While living in Philadelphia, Garcia promotes himself in his own neighborhood. Using social media, Garcia has slowly grown his platform and been recognized by a Parisian magazine that publishes adult comics, where that industry is very popular.

“I have comics in stores in Philly, there’s a store called Partners and Son that actually specializes in independent comics and they always have my stuff in stock just because I can walk over and give them copies and they usually sell out. I recently am going to be having comics in a magazine called Zine Panique and they’re going to be publishing a five-page excerpt from the book that I’m working on now but it’s going to be in French and colored. I colored it just for their magazine just so that it’s more special because it’s reprinted from something else. And so that’s really exciting.”

The pandemic has stalled many artists, like Garcia, from showcasing their work and promoting themselves in person. Many shows and events have been canceled or moved.

“After the pandemic, I plan to do comic book shows. There’s a lot of great comic book festivals and shows that I’d love to table at and get my work out there even more,” Garcia said. “I’m going to—probably if it’s still going to happen—I’m going to be in Seattle tabling [at] this really small yard sale convention happening in July, so that’ll be my first time tabling. So I’d love to just do more of that.”

In the end, Garcia would be happy wherever he ends up, as long he is doing comics.

“The biggest goal would not be for a show,” Garcia said. “There’s a lot of people who make comics and they’re only making it so that it can be a movie or it can be a show but I just use those as examples of […] the only way people end up making money from just the comics. But I’m going to be completely content working at the zoo or something and doing my comics on the side. I don’t care if it’s making me money. The ultimate goal would be to make my money only from comic books, whether that’s from graphic novels like books with a spine or my own self-published books.”