The magic of the movies returns with “In the Heights” 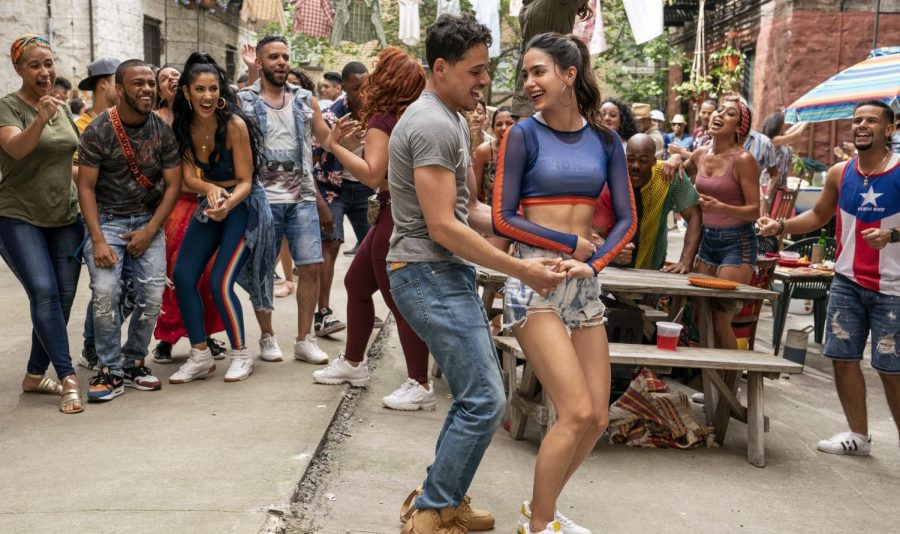 In the Heights is exactly the kind of wide-reaching, crowd-pleasing film that could have been released at any time. Despite this, no other time would be as perfect as right now.

Directed by Jon M. Chu, In the Heights is the feature film adaptation of the Broadway musical of the same name by Lin-Manuel Miranda. The film follows intersecting stories within a tight-knit community in the Washington Heights neighborhood of New York City. At the center of the story is Usnavi, an ambitious bodega owner with dreams of returning to the Dominican Republic, his original home which his family left when he was only eight years old. Surrounding him are countless interesting characters with ambitions ranging from success in fashion design to thriving in the foreign environment of Stanford University. Through each of these characters, the audience sees a wonderful representation of how a community pushes through adversity together, becoming stronger than ever before. Clearly, this film could not have been released at a better time.

With movie theaters finally returning to normalcy, it’s an entirely different experience at the movies than it has been for the past eight months.

For a while, it simply has not felt the same; going to the theater has felt like a cold memory of time far away in the past. Walking through the nearly empty corridors to arrive in an auditorium with no more than five other people was a very solemn experience; almost like a funeral procession. It was no longer a celebration of cinema, but rather a hopeless attempt to once again grasp any semblance of the joy of movie theaters.
The past month has been a different story.

Vaccinations have increased, cases have been falling, and restrictions are being lifted. Studios are finally confident enough to release their films in theaters. It’s clear to see that audiences are craving the communal experience that they lacked during the pandemic. In the Heights is unequivocally the perfect film to bring back that experience. With the story centered heavily on community and the joy of friendship, the film is a suspiciously timely ode to all of the memories countless individuals were forced to hold onto during quarantine.

One of the most noticeable aspects of the film is it’s impressively large list of characters. Between Usnavi, Benny, Nina, Vanessa, Abuela, and quite a few more, the film’s plethora of individuals brings a strong sense of family. As the film continues, the audience is slowly brought into this community as an equal. This feeling of community is where a majority of the enjoyment of the film comes from. However, this cast of characters brings with it one of the film’s greatest weaknesses. With so many motivations and arcs to follow, it becomes a daunting task for the audience to keep track of the characters. In fact, it almost makes one wonder if it’s even necessary in the first place. While it is true that no specific character is necessarily a negative, one must recognize that bigger is not always better.

Still, Chu manages to overcome this challenge for the most part. With bright colors, loud music, and a rapid pace, Chu’s direction leaves the film bursting with joy, acting not like an analysis or commentary, but rather as a representation. The film certainly presents important concepts regarding immigration, gentrification, and similar political issues, but it is not the main focus–– the real center of the film is purely a recognition of the individuals that make up a community, something which is supported by the lovingly crafted script and beautiful performances.

Of these performances are two clear standouts: Anthony Ramos as Usnavi and Olga Merediz as Abuela. For Ramos, the subject matter is clearly something very meaningful. Just through observing his performance, one cannot deny the passion apparent in every moment, as from the very beginning, Ramos expertly presents himself as the emotional core of the film. Of every performance in the film, none feel as alive as Ramos’. It’s almost as if at any moment he could leap out of the screen without missing a beat. That being said, Merediz as Abuela is equally stellar, providing a strong guiding force for the motivations of a majority of the characters. The role of Abuela brings with it large shoes to fill; her place in the story is defined by the unwavering love and wisdom she gives to her community. Despite this tall order, Merediz perfectly encapsulates exactly what the character needs to be.

The film is quite clearly not a masterpiece. The third act drags on far too long, too many characters are being juggled in a somewhat mediocre fashion, and it lacks any true nuance in its storytelling. But still, one can’t help but enjoy it. After over a year of restrictions, guidelines, and isolation, In the Heights is exactly what audiences need right now. Not everything needs to be a stunning and topical social commentary. Sometimes it’s just nice to sing and dance, if only for a few hours.