Junior Rachel Herbine reunites with her sister at University of Iowa 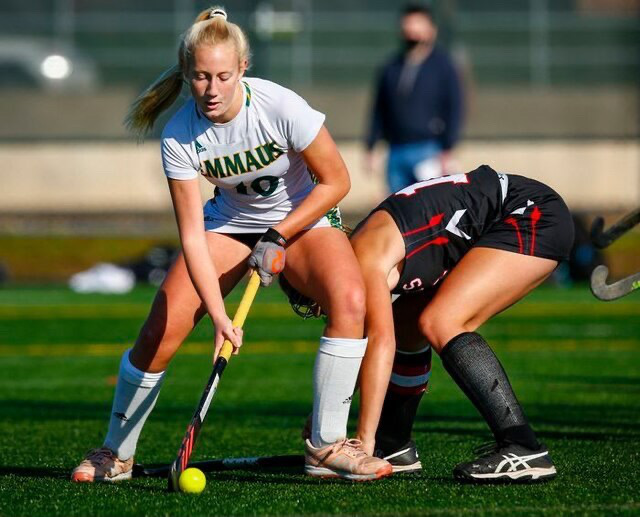 Junior Rachel Herbine verbally committed to the Big Ten school the University of Iowa in August, joining her sister and pursuing her ambitions.

Herbine began her field hockey career in first grade, starting in the LMYA league coached by high school field hockey players. Now, she is happy to switch roles as one of the high school girls coaching younger players.

Since starting the sport, Herbine has played alongside her older sister, 2021 graduate Annika Herbine. She describes their athletic relationship as competitive, especially when they would be on separate teams.

“My dad built this little carpet in our driveway so that we could play on it and not ruin our sticks, and we would play out there for hours every day just together passing and playing little games,” Herbine said. “Sometimes there would be, like, little league tournaments [where] we’d be on different teams, and they would get really competitive. But yeah, it was fun.”

Upon entering high school, Herbine’s sister became a mentor and role model for her, providing her with guidance during her freshman year. Herbine now does the same for younger athletes on the team.

“I kind of got all [of] the like, insight, because [Annika] knew everything from the past couple years,” Herbine said. “She kind of helped me out. But as we got older, and as she graduated, I think I was able to help the incoming freshmen, and all the sophomores, and stuff like that to kind of grow up as a team together.”

Herbine, 5 feet 5 inches, currently plays on the high school team as left forward, but is already looking to the future at her college career. In June of 2021, Herbine began college searching, and among the schools she was looking into were Penn State and the University of Delaware.

Meanwhile, her sister was playing field hockey at the University of Iowa — a school that had not even crossed Herbine’s mind. But after touring the campus, and visiting a couple other schools, she realized Iowa was the best fit for her.

Although her sister was the first one to expose Herbine to the university, she strongly believes that even if her sister did not attend the school, she would have still chosen Iowa.

Herbine officially verbally committed to the Big Ten school in mid-August, and is confident that nothing will change her mind. In a verbal commitment, either party can back out of the agreement because a National Letter of Intent has not been signed.

As for what the experience will be like going to the same college as her sister, Herbine predicts that it will be very similar to their time in high school together.

“I think it’s gonna be really fun,” said Herbine. “[In high school], we’d fight sometimes, but it would just be like little fun sister things. But I’m really excited to play with her again, and I think we will do really well.”

After college, Herbine has yet to figure out if she will continue professionally playing field hockey, or if she will go down a different path. For now, she enjoys the thrill of the game, and being in a team sport.

“I love the team aspect,” Herbine said. “And all my friends [are] on the field hockey team, and they’re so fun to be around. I got really close with a lot of them this year, and I think it’s just great to be in that team environment.”