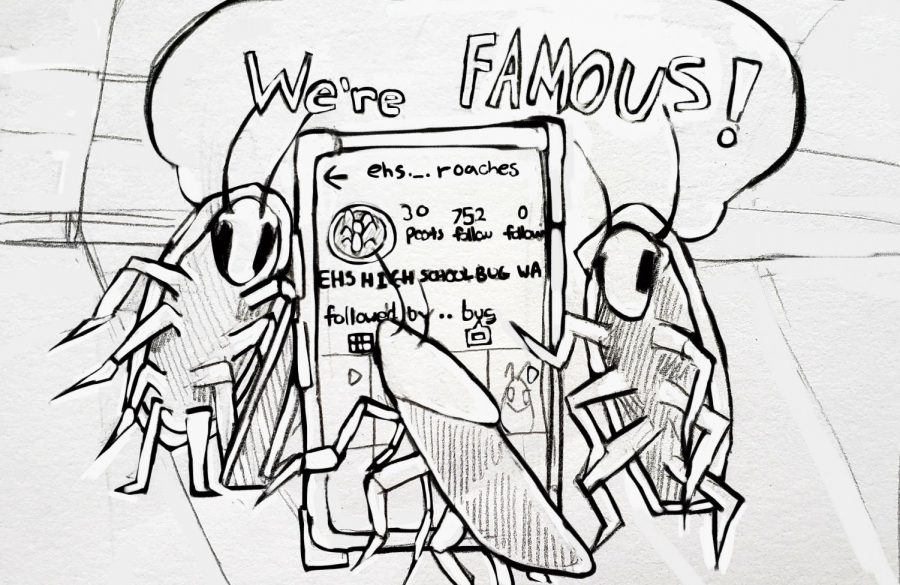 This previously ran in our September 2021 print issue.

A new IG account, ehs._.roaches, a page dedicated to chronicling the various different types of bugs found around the high school, has garnered over 1,000 followers since its first post on Sept. 9. But the main focus: the periplaneta americana.

The IG account owner, who initially wished to stay anonymous but has now revealed herself via Instagram Live, started the account because she thought “it would be really funny” to post about the various pests found around the school. While it began as a private account, she then made it public, prompting her platform to grow.

But the distinctive bug became hot-button fodder for Emmaus High School Families, a private group on Facebook where parents and guardians spread talk faster than a roach running the 100-meter dash.

Suddenly: everyone sees them. Kids are advised by families: Don’t put your backpacks on the floor because they’ll hitch a ride home. One of the fastest land creatures on earth is in the auditorium, the cafeteria, jumping into swim bags, waiting… Eventually, someone said they contacted the school — which was already on the scene.

As for the impact the cockroach Instagram account has made, the owner hopes that “people aren’t taking it seriously.” She is clear about the fact that she wants the account to be viewed as a joke, but she understands that it’s had a further influence on the community than she expected.

“I definitely feel like a bunch of people that didn’t know that this was a problem found my pictures. Especially a bunch of parents, [who] saw and then contacted the schools, so I guess it kind of helped,” said the account’s owner.

The account’s popularity, however, is in some ways a double-edged sword.

While it creates awareness, it has in some cases resulted in panic and countless assumptions being made.

“[The account] created a high level of concern amongst some people who saw it, and particularly those who made…certain assumptions,” Kieres said. “For example, that this has been going on for a long time, or that this is something the district wouldn’t do anything about.”

And that’s what some of the Facebook posts on the hardy insect suggested — such as EHS has had problems with crawling critters since the early 90s.

Kieres commented that the ideal protocol for when a pest of any kind is discovered in the school is to “not post it on social media immediately, but maybe to get to someone with the concern so that we can have the opportunity to address it.”

Furthermore, Kieres believes that “sometimes people assume that we know things, or that we know everything,” and that is not always the case.

As for what the school has done to combat the bugs, a pest company hired by the district found “no widespread infestation in our school” but did find “some isolated areas where some of these pests had been seen,” Kieres said, “primarily the auditorium area [and] the locker rooms.”

“[The pest company] started right away with a treatment that uses a gel and granular baits in order to mitigate the issue,” Kieres said. “They then will continue to implement that mitigation strategy until we’re clear of the issue.”

As to why the school doesn’t just ‘close and fumigate’ like some have suggested, Kieres insists that “schools are under very specific pest management protocols and guidelines under the law [to protect] the health and safety of students.”

The invasion of cockroaches and other bugs at Emmaus High School is not the worst thing that could have happened this year, but it has certainly created some of the most intense social media uproar on both Facebook and Instagram in the EHS community.