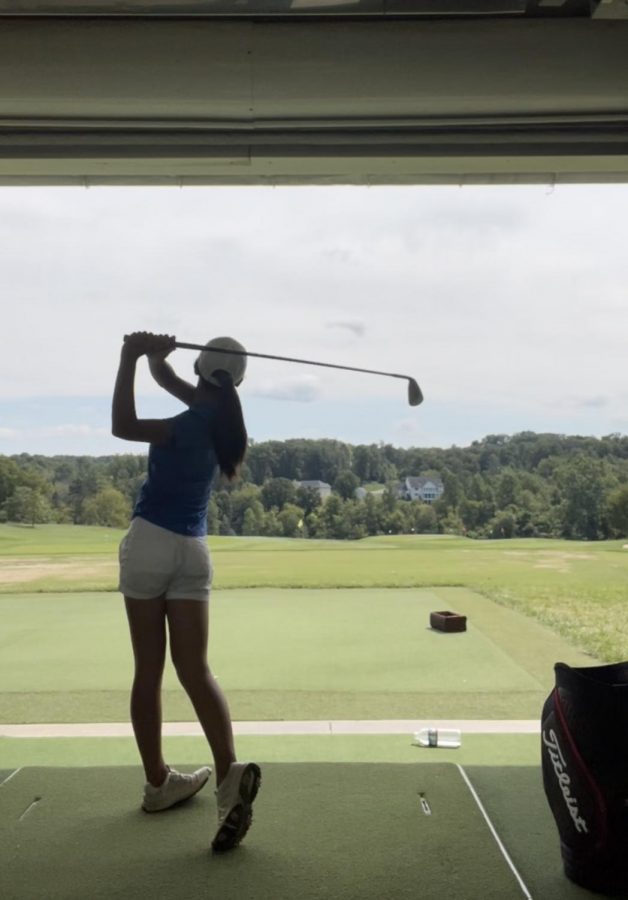 Wong practices her iron swing at the driving range. Photo courtesy of Wong.

This previously ran in our September 2021 print issue.

Evelyn Wong first held a golf club over a decade ago. Since then, she has traveled halfway across the world — and back — to land in the exact same spot, but in a whole new world.

Wong embarked on her golf journey at a very young age, thanks to her dad’s love for the sport. It was not until middle school that she began focusing on tournaments and college.

“He [Wong’s dad] had me and my brother start when we were like five or six, but it was just for fun,” Wong said, “like we’d take a little plastic club from Costco or something and whack a ball.”

Wong grew up in Macungie, following the path of East Penn education until transferring to the Shanghai American School (SAS) in Shanghai, China following her father’s job assignment. During her four years abroad, Wong enjoyed the experience, but was disappointed by the restrictions it put on her golf opportunities.

“All golf courses there were members only — memberships are insanely expensive — and playing one round as a guest costs around $200, not including caddy tips [which were] $50,” said Wong. “That’s why I came back every summer, but COVID made frequent travelling like this a lot more difficult.”

SAS had a golf team, although Wong unfortunately injured her wrists in ninth grade, and could not participate until the following year. Even so, she described the team as more of a club than a competition environment — certainly different from athletics in the U.S..

Her plan was to finish out her senior year in Shanghai, but China’s new COVID policy required a special visa, which Wong kept getting denied for. The new plan was to stay in the U.S. for her junior and senior years.

Now, however, Wong embraces her circumstances, expressing gratitude for her opportunity to finish her schooling at Emmaus.

“Coming to Emmaus made me realise how spoiled I was in my previous school,” said Wong. “The school bus doesn’t wait for you at the stop anymore, the lunch lines are insanely long, [and] they don’t serve coffee in the morning. At least I do get a touch of reality and how school should be at any other institution.”

Under her unique circumstances, Wong was homeschooled her junior year, while also participating on the Emmaus golf team. With her first time playing golf on a team, Wong felt pressure she was previously exempt from as a solo player.

“It was just really weird, because instead of just getting anxious about your own score, you have to get anxious about everyone’s score,” Wong said. “So it’s like, if you don’t do good, you let down seven other people who’re playing on the team that day, and it’s just a lot more anxiety from that perspective.”

On top of jumping head first into a highschool golf team, Wong came face to face with being one of few girls on the team. Her junior year, Wong found comfort with having 2021 graduate Michelle Cox on the team with her — a feeling she misses as she is now the only competition female on the golf team.

“Last year, when there was Michelle Cox, it was a lot nicer knowing that there was another girl on the team,” said Wong.

Outside of Emmaus, during a match between Bethlehem Freedom, East Stroudsburg North, and Allentown Central Catholic, Wong was confronted with the challenge of being the only female player on the course.

“Out of all 40 people there, or something, I was the only girl,” said Wong. “And that was really intimidating.”

During the same match, Wong encountered a struggle to maintain her position at the “red tee.” The red tee is the typical shooting position of female golf players on a co-ed team; it is further forward than the boys’ tee, and therefore closer to the hole.

“Because I was the only girl, he [one of the other coaches] was trying to push me back because he knows I have an advantage if I play really forward, so it was kind of scary for me,” said Wong. “I did not want to get disadvantaged.”

Aside from the difficulties that come with being in the minority of golfers in the area, Wong describes golf as taking a five-hour SAT without any rest; it is mentally exhausting and extremely stressful.

“You have to keep yourself calm,” said Wong. “Because once you start over-analyzing the bigger picture, you’ll be like, ‘Okay, I’m on my way to doing really well. I only have four holes left. All I have to do is just do good.’ Then you start freaking out and doing bad. So you just have to focus on the next shot and focus on the moment. And I think that’s really hard for me because I start getting anxious.”

Before the stress of playing on a team, being one of few female golfers in the area, and undergoing the mentally taxing environment of a golf match, Wong’s ultimate goal is to just improve her skill. Since seventh grade, she has slowly lowered her shooting score, finally breaking the 60s this year — a huge success for Wong.

Wong is happy to be a part of the Emmaus golf team and is enjoying her last season as a high school player. Looking ahead, she is excited to take on the new endeavor of playing on an all girl’s team in college.

“I really want to play in college. It’s kind of been like something I’ve been determined to do,” said Wong. “It’s easy when you have a goal for something, and you look forward to succeeding in it. I just really enjoy reaching [for] that end milestone, like the end goal [of playing in college], and really putting in all the work and reaping as much as I can out of it.”