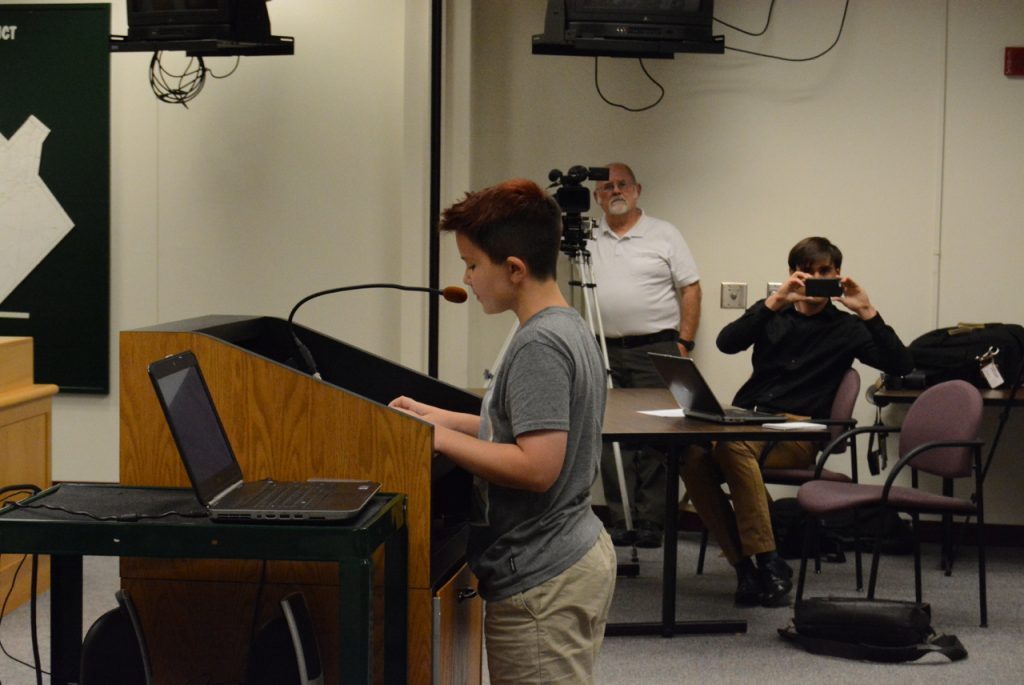 Ari Bowman gives his speech as the media looks on.

The Sept. 12 meeting of the East Penn School Board drew a larger crowd than usual, as well as national media attention.

At the public comment section of the board meeting, 17 people came to speak about transgender students’ rights. Many others attended the meeting to show their support for the speakers, particularly Alisa Bowman and her transgender son, Ari Bowman.

Ari, a seventh grader at Lower Macungie Middle School, defended the right of transgender students to change in the locker room of the gender with which they identify. He also offered insight into the life of a transgender student in the East Penn School District. For him, that involves supportive friends and positive experiences.

“The East Penn I will always remember is the East Penn that has supported me from first grade till now, regardless of the fact that I’m transgender,” Ari said.

Ari’s speech drew widespread media attention–online news sources such as Buzzfeed, AOL, and Yahoo picked up Ari’s story. Actor Colton Haynes, who plays roles in shows “Teen Wolf” and “Arrow,”  publicly supported Ari on Twitter, calling the middle-schooler “an incredible light” and “inspiration.” A video of his speech, posted by his mother on Facebook, has received over 33,000 views.

However, Ari was not the first school board speaker to draw national headlines on the topic of transgender students in public schools.

Three weeks earlier at the Aug. 22 board meeting, Emmaus freshman Sigourney Coyle voiced her discomfort over changing “in front of someone who I don’t identify with who is physically male” in school locker rooms. She attributed her unease to her religious beliefs.

Coyle, who “[has] nothing against transgenders whatsoever,” claimed that by allowing transgender students to change in the locker room which they choose, her rights to “bodily privacy” are being infringed upon by the district.

Coyle’s mother shared the speech on Facebook, garnering over 25,000 views. In addition to local newspapers, news sites such as Buzzfeed, The Huffington Post and The Daily Dot featured her address, putting the East Penn School District in the national spotlight. After the August  meeting, a firestorm of hateful comments began appearing online, both sides say.

Alisa Bowman “felt stabbed in the heart” after reading comments deeming transgender students “perverts and freaks and misfits,” which prompted her to organize supporters of transgender rights to attend the Sept. 12 meeting.

“There are times in your life where you find out that you need to stand up, and this was mine,” Bowman said.

According to Coyle, similarly vitriolic comments were aimed at herself and her family.

“I have gotten death threats to me and my family,” Coyle said.

Coyle claimed that these messages have caused her to take the bus instead of walk to school “until things die down.”

“I chose not to go [to the Sept. 12 board meeting] because things are already tense,” Coyle said.

However, some people who reached out to Coyle were willing to discuss the matter with her. Coyle agreed to an email interview with The Stinger, and she shared her side of the story.

“The comments that were full of hate on either side of the debate, I have ignored,” Coyle said. “The ones that seemed intelligent and well thought out, my family answered. It was surprising how many people that started out angry at us, ended up in full support of us once they heard the rest of the story.”

According to Coyle, in middle school, she tried but was not able to receive exemption from changing for gym, even when she cited religious reasons. She said that she “got in trouble for changing in the bathroom stall, because it’s against the rules.

“Then we wrote complaints to the District Superintendent about the state of PA school codes that give me the right to be exempt to anything in school that was against my religion,” Coyle said. “He denied me too. I only went to the school board after all other options failed.”

Among those who reached out to Coyle after her speech made headlines were two transgender freshmen from EHS. Coyle said that after a discussion, they were able to come to an agreement.

“By the end of the chat, we both agreed that private changing areas for everyone or a neutral locker room were the best solutions,” Coyle said. “We both felt that all the hate on both sides was terrible and that more people like the two [transgender] students and I talking respectfully is the only way a real solution will be found.

Despite being able to reach an agreement with some of her peers, Coyle is still facing negative reactions from others.

“Starting high school is hard enough without all the hate and people avoiding me,” Coyle said.