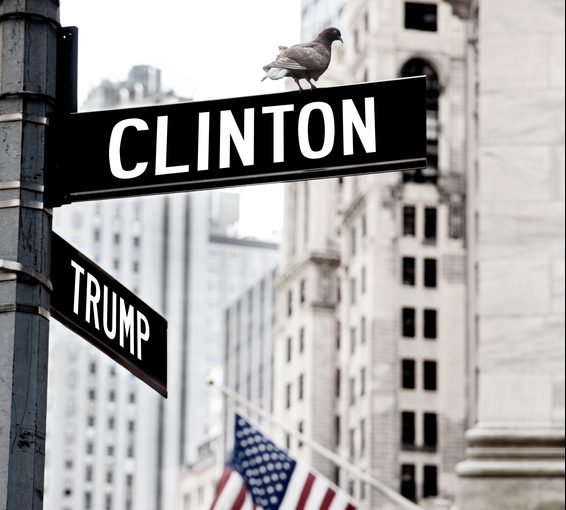 The weather wasn’t the only hot topic this summer, as the presidential election continues to be a fierce struggle – with Pennsylvania caught in the middle.

Throughout the course of the election, candidate Hillary Clinton has more often than not held a lead in the polls over her opponent Donald Trump – as recently as last week, Reuter’s State of the Nation poll approximated that Clinton had a 95 percent chance to win the presidency on Nov. 8. However, the race has been getting closer and closer as Clinton’s lead diminishes.

Pennsylvania will play an important part in the election, as it is one of 11 states that lean towards Clinton but ultimately remain undecided. Only six states are classified as swing states, or states that are a complete toss-up, and these include Florida, Ohio, North Carolina, Nevada, and Iowa.

“The polls look like Clinton is going to carry the state,” Warnke said. “Pennsylvania has voted Democrat for the past 28 years. The demographics favor the Democrats.”

Junior Jacob Witman, however, feels that it isn’t so certain.

“I think there’s a decent chance that Pennsylvania goes Republican, because historically there’s a lot of Republican voters and Trump is actually making efforts in Pennsylvania now,” Witman said.

Pennsylvania may be an important battleground, but the swing states are even more crucial for the two candidates.

“It’s very difficult to win the presidency without the support of these undecided swing states,” said Warnke.

Trump and Clinton continue to battle it out in the states that remain undecided, and a recent NBC News survey found Trump and Clinton neck and neck in Arizona, Georgia, Nevada, and New Hampshire. Despite the intense struggle in several crucial states, polls still predict it will be Clinton who lands in the White House.

“Clinton will win,” Biello said. “ She has a strong education in political science and though people don’t necessarily agree with her policies completely, she has more tangible plans and policies that she wants to put into action than Trump does.”

“I think that in the end, Hillary will win the election as people will realize that Trump isn’t trustworthy enough to be the commander in chief,” Pennella said. “I also believe that Hillary has more concrete plans which will win people over come Election Day.”

However, opinions are divided in EHS. In a poll of 314 students, 35 percent sided with Clinton, just one  above the 34 percent who support the “Third Party” category; this left 31 percent supporting Trump.

Conflicting opinions within EHS reflect the political turmoil of the entire nation, as Trump and Clinton have both scored some of the lowest favorability ratings in decades. According to a poll in June by Gallup.com, 33 percent of Americans had a “highly unfavorable view” of Clinton, and 42 percent Americans had such a view of Trump.

Junior Caleb Burkhardt believes these negative ratings are due to overarching dissatisfaction with the two-party system.

“This election shows that the people are dissatisfied with the current political system on both fronts,” said Burkhardt. “The candidates’ high disapproval ratings create an entry for third-party candidates to make themselves more visible and perhaps break the two-party system that has held the country in its iron fist since the Democratic-Republicans and Federalists began bickering in the 1770s.”

“Mostly, people are just fed up with the political system in general,” Witman said.

The third-party candidates are doing their best to prove this point, as Libertarian candidate Gary Johnson and Green Party candidate Jill Stein are claiming 16 percent and 6 percent of the votes in Colorado, respectively. Johnson is also a popular candidate with the military community, and he is stealing anti-Trump voters, who feel as if both main candidates are too much to bear, from Clinton.

While the third-party candidates hardly stand an actual chance at winning in this election, their poll results represent the controversy and scandals surrounding both Trump and Clinton. Many perceive Trump to be bigoted, racist, and offensive due to his remarks about Mexicans and Muslims. Clinton, on the other hand, has received backlash for mishandling emails containing sensitive information.

Warnke, however, feels that the media has mishandled the election and cast both candidates in an overly-negative light.

“The media has done a very poor job in explaining the strengths and successes of both candidates,” Warnke said. “They tend to focus on only the negative aspects of the candidates.”

No matter how negatively the American people view Trump and Clinton, however, one of them will become president this November. Burkhardt views this as a bad thing, but not one that America can’t work past.

“Both choices for our international diplomat and Commander in Chief are bad,” Burkhardt said. “But the good news lies in the fact that, in theory, the American people can come back from whatever evils befall them and force change through direct action.  Making our voices heard is the only way to ensure that whatever state appears in 2017 serves us, not the other way around.”