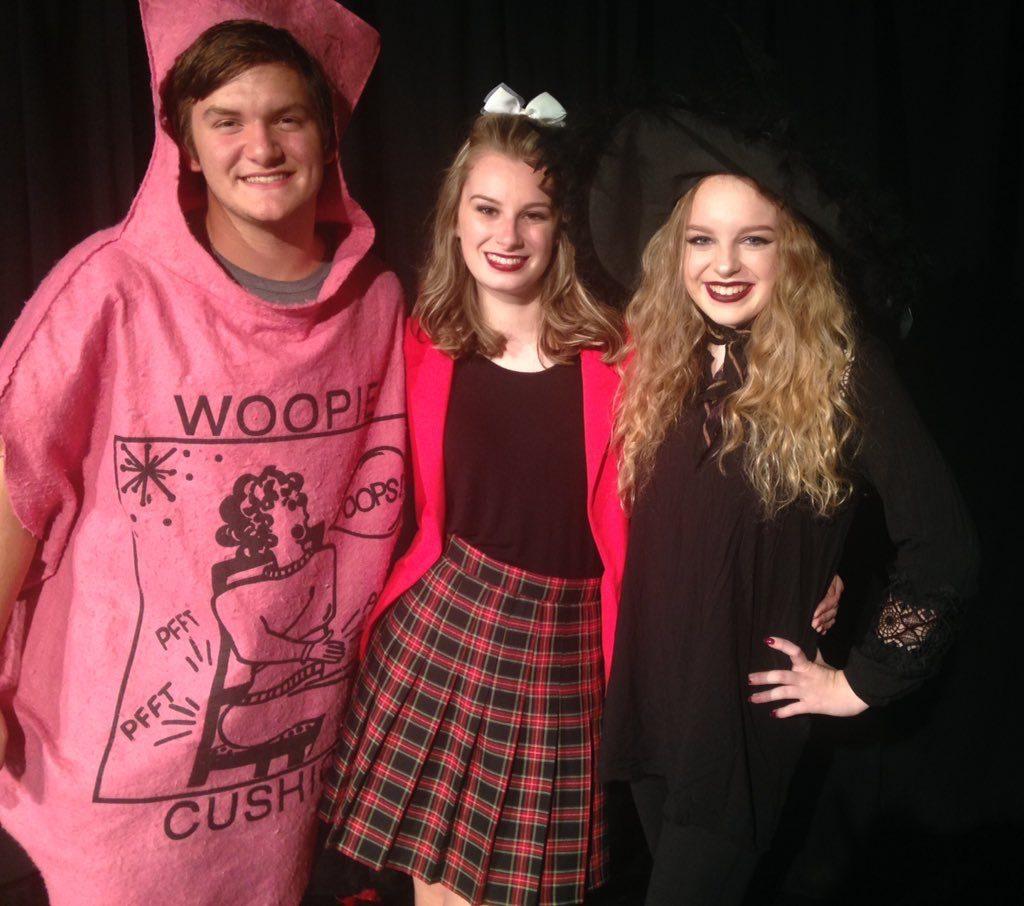 Emmaus High School’s Drama Club is comprised of a variety of students — all of whom  share a passion for theater and acting. On Oct. 27, the club held its annual Halloween party where club members dressed in costumes, engaged in improv activities, and held a costume contest. The Stinger dropped by the Halloween shindig to ask senior Julia Bezems, president; senior Leah Gaydos, co-historian; and junior Gracie Flood, club member, about the club’s highlights. Drama and communications teacher Jill Kuebler advises the group.

Stinger: How would you describe a typical meeting?

Bezems: We have seven officers, so we each go through and say the things [that] we are in charge of. I’m president, so I’ll talk about the upcoming shows and everybody’s responsibility is for the upcoming show. Robert [Lynn] usually talks about social media because he is our social media person. And then all of the other officers talk about what their responsibilities are. Jason [Bowen] is responsible for the Shakespeare Festival stuff. Leah [Gaydos] is usually responsible for anything administrative or organizational. And then Luis [Rivera] really gets everyone hyped up. Joe [Freemont] is responsible for the comedy series that we are doing, it’s kind of like a sitcom… So a typical meeting is usually pretty short.

Bezems: My favorite part about the club is doing a show with other people really makes you close to them — it forms bond between people that I don’t know if you can get anywhere else. You have to trust them enough to change in and out of costume in front of them. You have to trust people on the stage to be vulnerable with them. And I think that is really awesome.

Stinger: How does it feel to be president of the club?

Bezems: I love being president. I’ve been a part of Drama Department for all four years, and I just feel like I’m trying to bring the most love and support that I can to everybody in the club. I love having the responsibility of being in charge of this group of people because it is such a pleasure to work with them everyday.

Bezems: Well I did theater in middle school and I just really liked it, so I decided to try out for the play my freshman year and I though ‘eh I probably won’t make it,’ and then I made it and I was like ‘Wow, I really like this.’ I liked the people, and the people were really welcoming to me my freshman year so then I joined the club and I haven’t looked back.

Stinger: What do you hope members gain from this club?

Gaydos: The commitment — you can be as involved, or as uninvolved, as you want to be, so it’s very flexible. You could be the most involved person and be in every single thing we do or you can just come to meetings and hang out with us.

Stinger: How long have you been involved in this club?

Gaydos: I’ve been involved in this club since freshman year.

Gaydos: My favorite club memory was my sophomore year [when] a senior, [named] Mary Kate, came dressed as [Mrs.] Kuebler for the Halloween party and I thought it was the funniest thing ever.

Flood: My favorite part would probably be the people. It sounds so cheesy but there is definitely a lot of very funny people here — and funny people just make everything better. We could have improv nights and nobody came, it would be nothing… The entire club is based on the people and the relationships that we all have together.

Flood: I’ve been interested in theater ever since middle school and then I heard a lot of stories of how high school theater just got better, you just kept moving up. I came here and I met all of these people and I was like ‘This is why I do it.’

Flood: Probably the Halloween improv night from when I was a freshman because it was the first time [that] I dressed up and I was like ‘I don’t know, is it weird that I dressed up?’ Then I got here and everybody was all decked out and having a great time and I was like ‘These are my people.’ There’s no judgement here — everybody is just who they are.