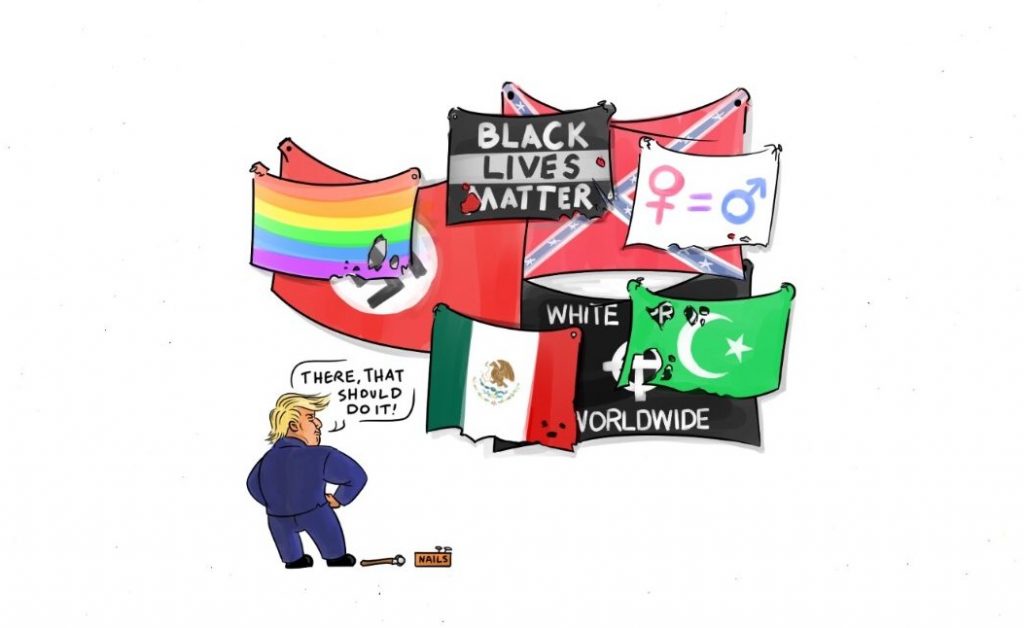 Illustration and text by Angeline Stein

Flu season is upon us, but you know what should really make us sick? Gullible Americans who actually, seriously think President-elect Donald Trump has his voters “shook” because he told some of his gay-bashing, women-hating, Swastika-spray-painting hate criminals who emerged in his wake to “stop it.”

“If it helps, I will say this, and I will say right to the cameras, stop it,” he ordered his supporters, some of whom responded to his Nov. 8 victory over Democrat Hillary Clinton by committing hateful acts.

Yes, Donnie, you go. Say it right to the camera. Don’t say it to whoever graffitied a dugout in New York with “Make America White Again.” Don’t say it to the kids who racially targeted and harassed a group of black University of Pennsylvania freshmen. Don’t say it to the two men who robbed a student and the assailant who attacked another, both because the girls were wearing hijabs. Don’t say it to the Detroit middle school students who chanted “build the wall” the day after the election.

And don’t even say it to the kids at two local high schools — a mere 8 to 10 miles from our hallways — who called black students “cotton pickers,” used the dreaded “N-word,” and drew swastikas on school property.

Say it right to the camera. We all know there’s only one thing you care about, and that’s looking like you care.

Trump and his circus of an administration can change their stances on immigration, Obamacare, abortion, the LGBT community, or throwing Hillary “Nasty” Clinton in the slammer. They can promise every minority in the country a travel-sized can of Mace to defend themselves with and a $5 Versace gift card.

But no matter how the big Don tries to cover up the hate his election has spread, it’s like putting makeup over a bad pimple: some people may be duped, but underneath, it’s still an angry, ugly, red-faced, painful blemish that will leave a scar. Fool us once, Donald, shame on you. Fool us twice? Not on your spray-tanned, combed-over, hate-mongering, $3.7 billion life.