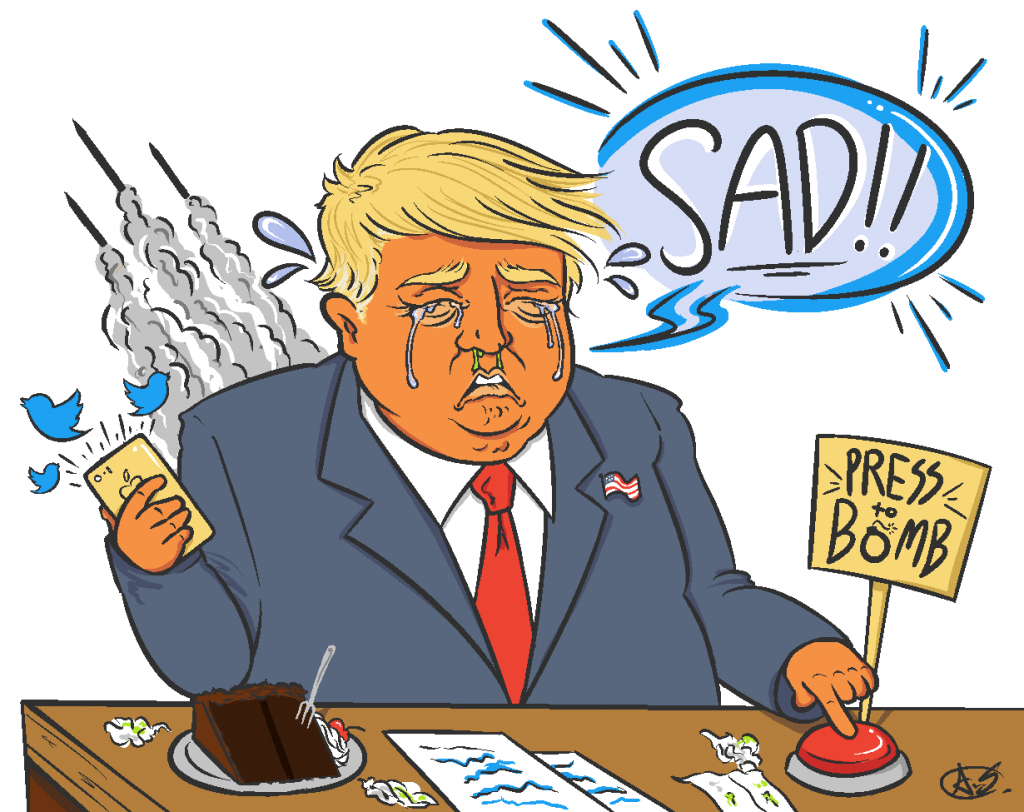 The semi-organized chaos of “The Trump Administration” offers an experience unlike any other. It provides a perfect blend of political drama and bitter comedy with the undertone of a hopeless apocalypse.

The movie boasts of a highly talented cast, including Donald J. Trump as himself, Kellyanne Conway as the one who got stuck explaining all of her boss’s mistakes, and Sean Spicer as the White House Press Secretary. Spicer’s role is a huge step up from his portrayal of the Easter Bunny during “The Bush Administration.”

“The Trump Administration” begins with a public relations nightmare about crowd size at the inauguration. This drama lasts entirely too long and is unrealistic because the writers decided to coin the term “alternative facts,” which just added fuel to the fire. This is only one example of a poor writing decision; the story is speckled with countless others.

In the middle of the drama about crowds, the audience is taken through a montage of executive orders, each growing consecutively more absurd. In this section, the writing seems to struggle due to the unbelievability of Trump’s Muslim ban order. The producers seemed to think that this would actually be acceptable to the American public. They are only able to salvage the film’s status as realistic fiction when several federal judges choose to work against the order because of its blatant unconstitutional qualities.

One redeeming quality of the movie is the use of outlandish Twitter postings as a motif thrown in between big story elements. This gives “The Trump Administration” some comedic relief by coupling the informality of Twitter with the enormity of President Trump’s responsibility. Though these posts are often meaningless or simply false, they contrast well with the tone of the film.

Because of the incredibly long run-time, numerous polls have been compiled to generate a running approval rating. According to FiveThirtyEight.com’s compilation of adult pollings, the current rating is 40.7 percent. Based on historical records collected by Gallup.com, that is lower than the average approval of the previous 12 installments of the “POTUS” franchise.

“The Trump Administration” has recently veered away from petty drama, and started tackling bigger fish, like bombing Syria. Reports from Syria state that a US airstrike struck a mosque in northern Aleppo and killed at least 40 worshippers on March 16. US officials claim that the strike targeted a meeting place housing Al Qaeda terrorists, though this is contradicted by a Human Rights Watch investigation. While this makes for good drama in the film, it paints the so-called protagonists of the story as incompetent.

From the 101 days of footage that has been revealed, “The Trump Administration” has consistently proven itself as a complete mess. The creators seem to think that throwing random bits of drama and PR incidents in the viewer’s face will draw attention away from their failures. The eyes of every member of this nation are now glued to this mess of a production for the next 1,360 days. If it doesn’t get better, everyone will have to tough it out until the next installment and hope that Trump is not granted a sequel.