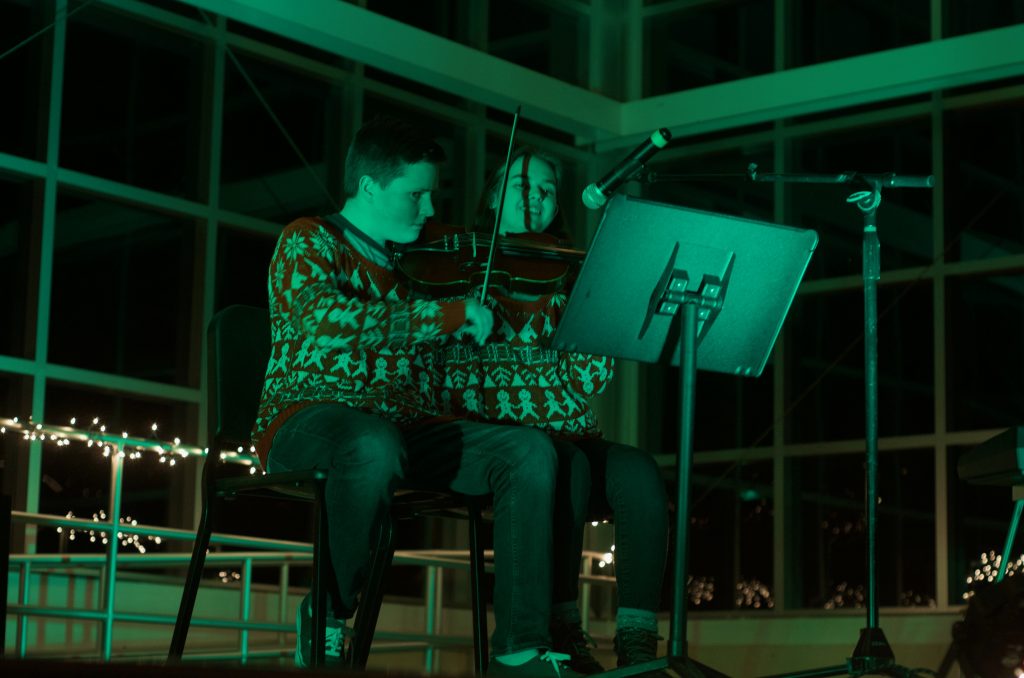 On Jan. 19 in the Emmaus High School cafeteria, the EHS Orchestra hosted its annual Coffee House concert, showcasing some of Emmaus’ most talented musicians and dancers.

The purpose of the concert was to raise money for the EHS Orchestra — it is one of their most successful fundraisers each year. Emceed by junior Elijah Zukowski, the event gave passionate EHS students an opportunity to perform live for their families, peers, and teachers. As well as live entertainment, the Coffee House also provided snacks for sale, raffle baskets, and a fun Friday night experience for viewers at $5 per person.

The list of performers was long and diverse, ranging from jazz dancers to musicians to singer-songwriters: the concert had a little something for pretty much everybody. Although some performers chose to go solo, most performed alongside partners. One duo of sophomores, Dylan Michael and Nate Garcia, pleased the crowds by performing one of Michael’s original SoundCloud compositions, Sundaze.

“[Music] was something I’ve always loved. I started playing the drums when I was eight, so it was always a fun hobby,” Michael said. “Nate and I love doing solo stuff, but at the same time we like to work together.”

In addition to singers, viewers were particularly humored by one pair of violists, junior Darci Ott and sophomore John Whitby. They performed two songs on one viola while wearing a sweater that joined them together. According to Whitby, the idea came about at chamber rehearsal.

“I was playing [viola], and Darci sat down next to me and offered to do the finger section for me. And we said, ‘Let’s take that to Coffee House!’ and then the sweater idea came,” Whitby said.

While the majority of performers were singers or musicians, one pair of dancers stood apart. Seniors Erin Coffey and Luke Csordas danced together to two songs; Overture from Chicago, and Chasing Cars by Snow Patrol. Although the two practice different kinds of dance, they managed to blend their styles into an artistic performance.

“Erin does mostly ballet, and I do mostly contemporary and jazz,” Csordas said.

“We did [The] Nutcracker together before, so it is nice to be able to perform with a friend tonight,” Coffey said.

Over the course of the night, there was no question that the performers had passion for their craft, but also about giving the viewers a great night and raising orchestra funds. However, it wasn’t just performers who felt the excitement. The Coffee House would not be complete without its host of parent volunteers, who helped run the snack stand and advertise the raffle baskets. Rob Wertz, father of Nat Wertz, an EHS sophomore in orchestra, spent the night helping out the snack stand.

“I think [the Coffee House] is great, it’s my first time here and it’s awesome. I think it’s a great opportunity for the orchestra fundraising,” Wertz said.

By the end of the night, it would be an understatement to say that viewers and performers alike were brought together by music. Despite their differences, music allowed the diverse EHS community to bond. The cafeteria was filled with smiles on faces and a warm sense of home.

“I honestly [think] that everyone did really well, and just had a lot of fun,” senior singer Emily Wolfe said.