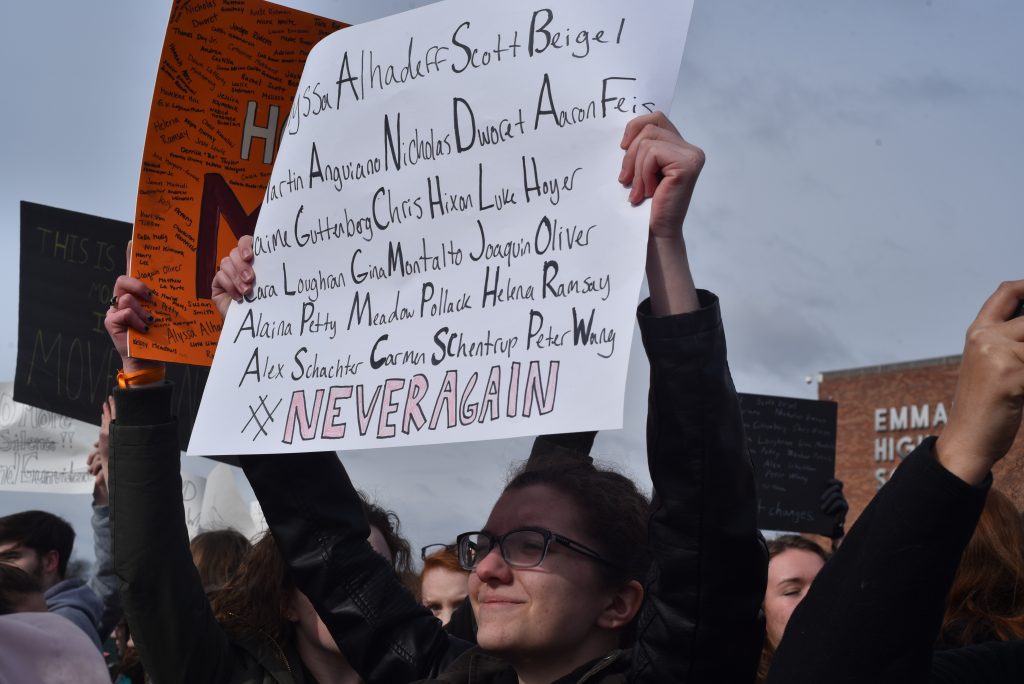 On Monday, the East Penn School Board voted 6-1, with one abstention, that they would not adopt school director Carol Allen’s policy on political demonstrations in school.

Allen, who cast the only vote in favor of the policy, had reservations about the March 14 walkout meant to honor the victims of the February high school shooting in Florida.

Allen was primarily concerned with teacher involvement and the fact that the walkout was held during school hours. She also mentioned issues with student safety.

Allen’s proposed policy stated that the district has the authority to restrict the time, place, and manner of student expression in the interests of order and safety. It also said that while the administration cannot discipline students on the basis of their viewpoints, it has the “discretion as to whether or not to discipline students for missing class while participating in a walkout during the school day.”

The crux of the proposal entailed EHS administration collaborating with the student body to make sure events take place after school hours and in a safe, organized manner. It also mentioned that the plans for any event should be properly communicated to parents.

Allen responded to a request to comment and expanded upon her belief that political events, including the March 14 walkout, should not be held during school hours.

“Teachers enter into contracts of their own free will with any school district,” Allen said. “They are bound by the terms of their contract to observe all school policies and in this case, employee policy 321 and to discourage students under their supervision from violating it. District policy 321 has been issued to be consistent with state law governing public education institutions.”

Allen included a portion of policy 321, which reads as follows: “…However, district time, resources, property or equipment, paid for by taxpayers, may not be used for political purposes by district employees. Employees shall not engage in political activities during assigned work hours on property under the jurisdiction of the board.”

Several student speakers attended the board meeting to voice their opposition to Allen’s policy. One such speaker, junior Lena Heier, believes that EHS staff members remained politically uninvolved throughout both the walkout and the April 20 day of action.

“While we had the supervision of the administration and Dr. Kieres, it was unbiased, without political opinion,” Heier said.

Heier was involved with both the walkout and the day of action and asked the board to strike down Allen’s policy.

“I can say without any doubt that these were two of the most impactful, educational, and meaningful days of my career at EHS,” Heier said. “I implore the board to keep opportunities like [the day of action] alive and to not pass the proposed school walkouts and protests guidelines.”

Another student speaker, junior Samantha Smith, stressed that the spotlight is on students in terms of activism efforts.

“We have one of the loudest voices in the country right now, and regardless of what happens, we intend to use it,” Smith said. “When we change the world, regardless of your beliefs, will you still be proud of what us, your students, have accomplished?”

Much of the backlash against Allen’s policy originated from the perception that it would limit students’ First Amendment rights to free speech. Allen, however, does not believe this is true.

“Freedom of speech, freedom of assembly and freedom of petition are basic rights in the First Amendment of the Constitution of the U.S,” Allen said. “However, those rights have limits. Students are not free to determine, during mandated school hours and instructional time, when they wish to have a demonstration, political or not.”

School board member Chris Donatelli, responsible for the one abstention, supported Allen’s claim that the policy did not necessarily limit students’ speech.

“I don’t think this was established to suppress the students’ ability to speak, and I don’t think we should be doing that, but I do think there should be some guidelines,” Donatelli said. “We have policies now for new things that came up such as transgender bathroom usage, and I think this is just another one of those things that we should be looking at, considering some set of guidelines so that when it does come up, there’s something in place for it.”

Another one of Allen’s main concerns was over student safety. Allen cited a middle school student in Texas who was killed by a truck during his participation in a walkout.

“From a safety standpoint, that’s another aspect that the district has responsibility when the parents send their children to our school district; they expect a certain amount of safety,”  Allen said.

Superintendent Dr. Michael Schilder, however, praised the responsibility with which the students and administration handled the walkout and day of action, claiming that Allen’s policy was unnecessary.

“ I would think that most reasonable taxpayers may be comforted by the fact that the younger generation is making an effort to improve the world we live in, particularly if those young people are aware of our system of laws and the Constitution that are intended to guard us all,”  Allen said.