EHS embarks on the road to recovery after flooding 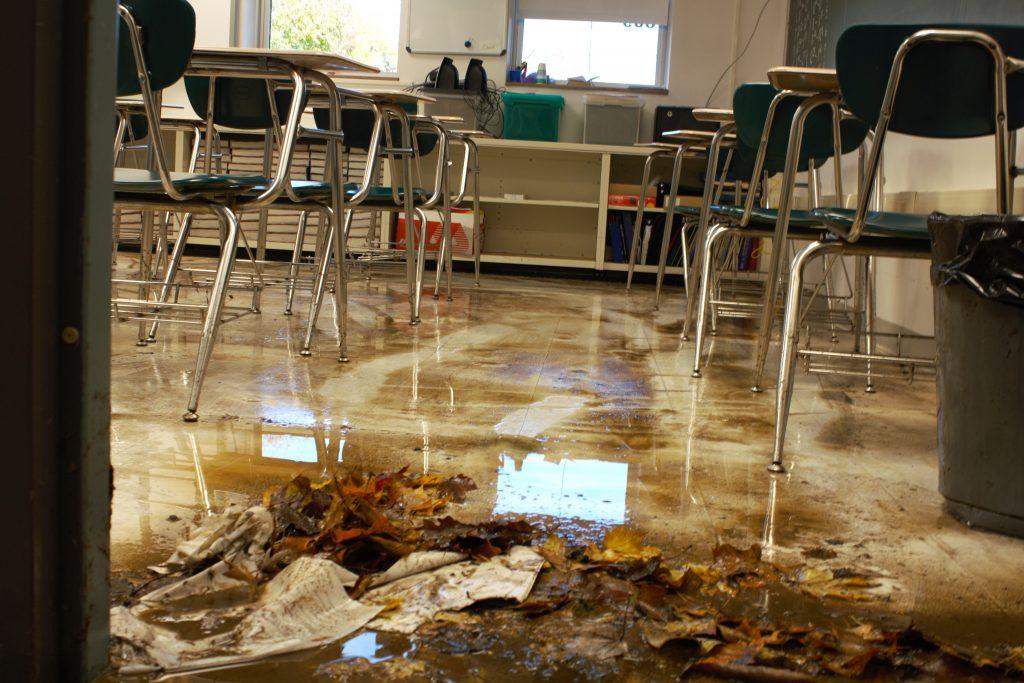 Lower level classrooms filled with dirt and debris after a freak storm caused a flood at EHS. Photo by Rylan Bassett.

Heavy rains and blocked storm drains left Emmaus High School flooded with 500,000 gallons of water and nonoperational for a week, and restoration efforts are still at full steam.

A large amount of leaves fell in a short time due to the storm, covering drains lining Macungie Avenue late Nov. 2. This led the rain to collect on streets around the area and to run to the downhill main office area.

And build up it did–until about five feet of water pressed on the main office doors. Consequently, the amount of pressure generated forced a glass pane to give way, sending a rush of category three water throughout the bulk of the lower level of the building.

Category three water is the most toxic out of three classifications of flood water. It is “grossly unsanitary,” contains “pathogenic agents,” and has the potential to cause “discomfort or sickness if consumed or exposed to humans,” according to Northern Arizona University.

So naturally, Onushco and a team of custodians worked hours to clean up, first attempting to mitigate the damage while it occurred.

“At 11:20 we were opening exterior doors to allow water to escape,” Onushco said. “At 11:36 we called the RestoreCore to help with the cleanup and restoration process. And by 1 a.m. most of the water was out of the building except for the auxiliary gym.”

Despite this quick action, normal operations at the school were disrupted to the point of no return–literally. The school board and administration decided that cancelling school for the rest of the week was the best option, both to ensure safety and to prepare for the following week by relocating classes.

Dr. Kate Kieres, principal of EHS, was at the forefront of these preparations.

“[Cancelling school] had to do with the safety of the building, making sure that all those rooms were air tested and safe for students, that we could seal off that part of the building safely without violating the fire code,” Kieres said. “And we also had to make sure that we could have construction happening in the building in a way that was safe. That we could assure that we had adequate safety procedure for screening visitors, the doors weren’t going to be propped open. And then lastly we had to make sure that the schedule would accommodate kids so that we could relocate all of the classes into other spaces. So I feel like considering all of those things that Monday was really the fastest we could get everybody back responsibly.”

Once the administrative team realized Monday was reasonable, they and the rest of those on site, custodial staff and district office staff alike, pushed to make this goal reality.

Hiring RestoreCore, a local remediation company, became an instrumental part in the restoration of the building. Arriving the evening of the flood, the company brought dehumidifiers, fans, air cleaners, and manpower. The district also hired a consulting firm, who played an integral part in ensuring the environment of the building met requirements to bring students back to school.

RestoreCore is currently working on restoring the remainder of the affected classrooms, down to 15 out of the 40 that were nonoperational at the beginning of the job, and the team meets with Onushco to guarantee that the process goes as smoothly as possible.

“We’ll meet almost everyday,” Onushco said. “To look at the schedules, to see when we can get things done, to see when manpower will be in…when students are in the classrooms and when they aren’t. So it’s basically…every morning I’ll go down…to find out where we stand and find out what the next goal is.”

Their current long-term goal is to have the remainder of classrooms functioning shortly after break. These will take longer to restore simply because of the scope of the damage. This factor played into the prioritization of the process.

“The main office and that 300 level were just so swamped with water and damaged that we knew concentrating on that part wouldn’t help,” Onushco said. “So you need to think ‘what areas can we get operational to make it so that students can come back to school?’ So we looked at the science hallways and worked our way back.”

Additionally, the administrative team needed to address the missed school days. The school district submitted an application to the Pennsylvania Department of Education in order to be excused from the 180 day in-school requirement for students.

“Technically the state is willing to forgive the five days that we missed,” Kieres said. “The catch is that…we still have to meet 990 instructional hours in a year in order to receive our full subsidy from the state. The folks in the business office did the calculation…and using those five days even without any snow or anything like that coming in the winter we would be at 993 [instructional hours]. So a little too close.”

The board tentatively plans to add on two days at the end of the school year as compensation for lost hours, but currently does not plan to change the date of graduation. In this case, seniors may not receive the 990 hours, which would still result in a loss of government subsidies.

Yet another concern is cost, one large chunk of which is the auxiliary gymnasium floor.

“I think the biggest challenge in all of it was probably trying to save the gym floor,” Onushco said. “Which we were unable to do. We knew that was going to be a large expense. [That] alone is going to be somewhere around $130,000.”

The district does not currently have a known final cost, but textbooks, drywall, cabinetry, and labor all add to the expenses tremendously. Luckily, flood insurance will compensate for these damages, and the insurance company came to the high school to discuss coverage soon after the incident occurred.

Overall, Kieres realizes that the flood disrupted many district staff, families, and students, but is thankful for the support the school received.

“I think we all know that this is a great community,” Kieres said. “I think that’s why we live here and go to school here and work here. This is a great place to be. But I suppose it’s times when you go through something like this that you really realize how great the community is. Without exception everybody stepped up.”