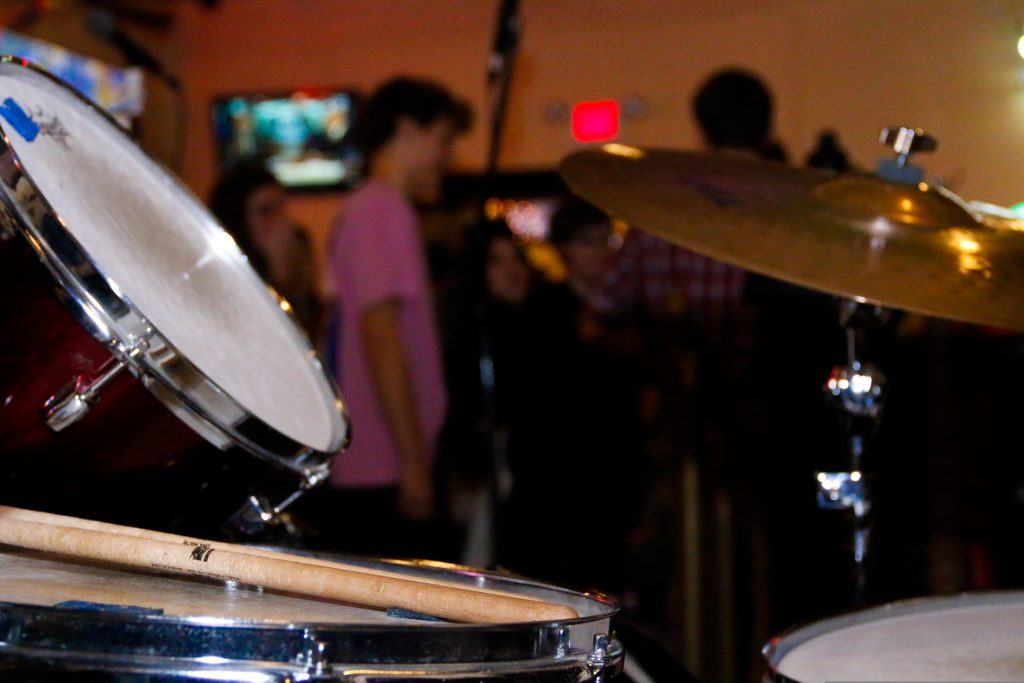 Spiders Dressed in Red celebrate the release of their debut EP with a show at Big Woody's Dec. 14. Photo by Rylan Bassett

The air is spiked with the smell of hot wings and pizza as drummer Dylan Michael sings his ABC’s in a soundcheck to the crowded room at Big Woody’s Sports Bar & Restaurant in Emmaus at 8 p.m., pizza Friday.

The band, Spiders Dressed in Red, debuted their first EP and performed a release concert Dec. 14. The band combines the talents of three Emmaus High School juniors: Michael on drums, Nate Garcia on lead vocals and guitar, and, since the performance, Miguel Abadilla on bass. Junior Aidan Connolly is also featured on trumpet for the the EP’s leading track, “Broken English.”

Before the Spiders Dressed in Red took on their arachnid alias, they went by the Plebs, a testament to an inside joke between Michael and Garcia. Their new name is also the title of a solo EP released by Garcia, and was at first jokingly proposed as a new band name, itself a metaphor for the negative forces in life and events that give way to emotional struggles. The spiders represent ominous endeavors eating away at a person’s soul.

The band originally formed at Lower Macungie Middle School, when Michael and Garcia began collaborating in eighth grade. In fact, the ideas for some of the songs featured on their new EP were born of that time, as they developed their lyrics through a process of rewriting and recomposing.

“‘Mindless, Mindless’ was the first song that we actually really wrote,” Garcia said. “The part where it goes into the chorus with that funky guitar part, that was originally for the verse, but then we rearranged everything. It came along pretty quick, and we wrote it in eighth grade. We’ve come a long way.”

Originally, Michael wrote the lyrics for “Broken English” to be included in his cancelled solo EP. Garcia convinced him to bring it back, and the group developed the track, adding Connolly’s bold trumpet riff. “Italics” and “Italics Pt. 2” went through a similarly tedious yet memorable journey of improvements.

“‘Italics,’ I think, represents me and Dylan very well,” Garcia said. “I came up with the melody for it and I wrote these lyrics that were really lovey-dovey, kind of really mediocre, and they were throw away lyrics… and then Dylan had these lyrics saved for a while, and then we mixed it. I came up with the music for this all, except for the drums, and then Dylan had the drum part and it ended up working well.”

To Michael, “Italics” and “Italics Pt. 2” deliver a message about the struggles of everyday student life. He wrote the poetically satiric lyrics for “Italics Pt. 2,” saying how people think “contagious thoughts convince you that coffee mugs, prescription drugs, and perfection will fix you.” The band decisively devised the songs in two parts because of the symbolic significance of the lyrics, and believe that the contrasting sounds from each track blend vividly.

“I wrote [‘Italics Pt. 2’] and I put a lot of effort into those lyrics and I’m proud of that song,” Michael said. “They both kind of represent the same idea for me… of struggling through school, and the side effects of it. I think the intense and the soft, I feel they work well together, and those were also written at the same time.”

One of their most popular songs, “Tangerine Dopamine,” elucidates the issues that come along with teenage drug use. The song inspiration came from one of Garcia’s friends.

“[For] ‘Tangerine Dopamine,’ I was talking with my friend Maddie, and she was telling me about this news story about all these people smoking orange cloves or whatever,” Garcia said. “I thought that was funny, and I thought of ‘Tangerine Dopamine.’”

In preparing for their first EP, the Spiders Dressed in Red spent eight months engaged in a rigorous creative process. Michael views this extensive period spent working on music as time well spent.

“I’m kind of a perfectionist, and I did all the mixing for [the EP] and it just took a long time, and there were a lot of challenges with mixing I would say,” Michael said. “But I like that kind of stuff, so it’s a task that I want to overcome–it’s not something I dread.”

According to Michael, during their most recent practice sessions, the Spiders typically maintained “very strict rehearsals” in the weeks prior to their performance.

The band creates and releases music for their own enjoyment, but hopes that others can find meaning to their lyrics as well. Their songs are mostly inspired by personal experiences, yet they believe that each one can cater to every individual; lyrics are entirely open to interpretation.

“A lot of the time, I worry about my audience for music, but I make the music ultimately for myself and I can say that for the entire band,” Michael said. “I hope people enjoy it just as much as I do. All the songs on [the EP] are not really surface-value songs; a lot of them were written after experiences.”

They performed songs from their new EP as well as covers of classic songs such as The Penguins’ “Earth Angel” and Ritchie Valens’ “La Bamba,” breaking with a brief intermission in between sets. The band also sold pins, tees, and CDs to celebrate the release.

“During intermission,” Michael said to the audience, “you can purchase CDs, T-shirts–or friendships.”

The shirts sold out halfway through the night, and the band scrambled for a blank sheet of paper to record the names and contact information of eager fans who wanted to get in on the next order.

Restaurant manager Parand Olamai believes that the band holds massive potential. A friend of Michael’s mother, Olamai also appreciates the feeling of familiarity when the band visits to perform.

Before Olamai let the Spiders Dressed in Red perform in front of her customers, she requested to hear a sample of their tunes. Needless to say, their music captivated her.

“Right away, I was like, ‘Yeah these guys are legit.’” Olamai said. “They may be young, but they really are great… I think the first time I booked them was at least six months ago so I heard their music and I loved their sound and their energy. They came in, they killed it. It actually was one of the best bands we’ve ever had, and I already had a lot of faith in them, but I was so pleasantly surprised. I was helping the [waitresses] bring out food, and I couldn’t help but shake my hips while I was serving.”

Junior Kelsie Baus, a friend of the band, and Garcia’s girlfriend, junior Liz Carter, can attest to the band members’ upright, friendly personalities. For Carter, being in a relationship with a musician is an exciting part of her life. An artist herself, Carter enjoys creating pieces for Garcia as he does for her.

“It’s interesting, people are always really, really happy for me because I do art of Nate all the time, like every week, it’s crazy,” Carter said. “And then he’s writing songs about me, and this [relationship] is such a deal.”

In the future, Spiders Dressed in Red aspires to continue their musical careers and perform publicly for their fans.

“Our goal is to play at Musikfest this summer, and just to keep creating music, and not repeat our past tendencies,” Michael said.

The Spiders’ new EP is available on Spotify, Apple Music, SoundCloud, and Bandcamp.

“[We want to] keep progressing, and hopefully supporting ourselves,” Garcia said. “It’s the dream, really, it is.”