NFL Divisional Playoff Preview: Which teams will advance to the Conference Championships? 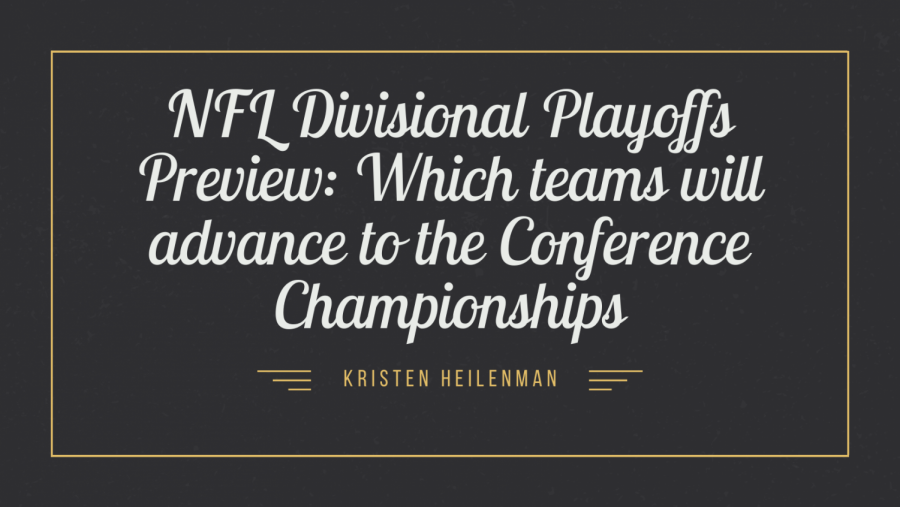 With the second week of the NFL playoffs underway, eight teams are looking to punch their tickets into next week’s conference championships and ultimately the 2021 Super Bowl.

The weekend’s first match, on Saturday at 4:35 p.m., consists of the Los Angeles Rams at the Green Bay Packers. While the Packers, being the number one seed in the NFC, obtained a bye last week, the Rams — the number six seed in the NFC — won 30-20 over the NFC’s number three seed, the Seattle Seahawks. This will be the first time these two teams face each other this season; the last time they went head-to-head was in Oct. 2018, with the Rams winning 29-27.

Although the Rams were able to win last week, they have a tricky situation with their quarterbacks. Their original starter, Jared Goff, underwent thumb surgery almost two weeks ago, so their second-string quarterback, John Wolford, played the last game of the regular season against the Cardinals and started the first game of the postseason; however, Wolford took a blow to the head and had to leave the game for precautionary measures, forcing Goff to play not fully recovered from the injury. With Wolford out for today’s game, Goff has been named as the starter. Will he be fully recovered and ready to face the Packers’ defense?

Even with the Rams competitive defense, I’m not sure if they have the ability to shut down the dangerous duo of Green Bay’s Aaron Rodgers and Davonte Adams. The two of them have been unstoppable, with Adams scoring 18 touchdowns this year. While I would love to see the Rams move on to the Conference Championships, I believe the Packers will pull out the win, but not without a good fight from Los Angeles.

Saturday’s second matchup at 8:15 p.m. is the AFC’s fifth-seeded Baltimore Ravens at the ACF’s second seed, the Buffalo Bills. The last time these two teams met was in Dec. 2019, with the Ravens winning 24-17. Last week, both teams had games: Baltimore beat the Tennessee Titans, the fourth seed, 20-13, while the Bills beat the Indianapolis Colts, the seventh and final seed, 27-24. For this matchup, both teams have one main thing in common — their quarterbacks were drafted during the 2018 NFL Draft.

Currently, the Ravens are considered a “hot team” in the NFL right now, as they are on a six-game win streak, including their postseason win last Sunday. While all games are a team effort, the Ravens’ success can be partially attributed to their quarterback, Lamar Jackson. Last week, Jackson threw for 179 yards and rushed for 136; he had the highest amount of rushing yards on both teams. Will the Bills defense be able to stop Jackson when he poses as a threat as both a passer and a rusher?

While Jackson has a stellar rushing game, Josh Allen, the Bills quarterback, has an amazing passing game. Last week, Allen threw for 324 yards and was 26/35 on passing attempts, with no interceptions thrown. This, coupled with the Bills’ wide receiver Stefon Diggs, will certainly be a challenge for the Ravens’ defense.

Sunday’s first matchup at 3:05 p.m. consists of the AFC’s seventh-seeded Cleveland Browns at the first seed in the AFC and reigning Super Bowl Champions, the Kansas City Chiefs. Coming off of a bye, the Chiefs are heavy favorites to win this game, and it’s no surprise why.

With MVP quarterback Patrick Mahomes, tight end Travis Kelce, and wide receiver Tyreek Hill, their offense seems unstoppable. Even though their top running back Clyde Edwards-Helaire is questionable for this game, they still have Le’Veon Bell, who they acquired from the New York Jets after week two this season. A Kansas City win this weekend seems likely, but I wouldn’t count the Browns out.

Last week, the Browns beat the number two AFC seed, the Pittsburgh Steelers. Personally, coming from a family that bleeds black and yellow, this loss was incredibly heartbreaking. The Browns won 48-37, after taking an early 28-0 lead in the first quarter. Pittsburgh’s veteran quarterback Ben Roethlisberger also threw four interceptions during the game. While Cleveland’s success can be partially credited to the Roethlisberger’s faults, you have to give them credit; quarterback Baker Mayfield threw for 263 yards and three touchdowns. The Steelers tried to make a comeback in the second half but were ultimately unsuccessful. To me, the main question is, will the Browns’ defense, who allowed Roethlisberger to throw for over 500 yards, be able to put a stop to the Chiefs’ destructive offense?

The final game of the weekend at 6:40 p.m. is the NFC’s fifth seed, the Tampa Bay Buccaneers, at the NFC’s second seed, the New Orleans Saints. Being a diehard Saints fan, this is the game I am the most excited about, but also the most nervous for. Both teams arguably have two of the best quarterbacks of all time: New Orleans’ Drew Brees and Tampa Bay’s, and former New England’s, Tom Brady. These teams have also met twice during the regular season, as they are both members of the NFC South division; New Orleans won both times, with the second matchup being a blowout win of 38-3, and easily became one of my favorite NFL games of all time.

Last week, after a slow offensive start, the Saints won 21-9 against the Chicago Bears, the seventh seed in the NFC. For New Orleans, wide receiver Michael Thomas, last year’s Offensive Player of the Year, returned from injured reserve, and running back Alvin Kamara, who tied an NFL record by scoring six touchdowns on Christmas Day, returned from COVID-19 reserve; each player scored a touchdown. This was also Brees’s fourth game back after he was out for four weeks after fracturing 11 ribs and suffering from a collapsed lung; even with time off, in my opinion, he still meets and exceeds expectations. After turning 42 this past Friday, there are multiple reports that this season will be Brees’s last. After heartbreaking and unlucky exits in the playoffs the past three years, hopefully, the Saints can win one last Lombardi for their future Hall of Fame quarterback. New Orleans’ defense had a great game last week, as they allowed the Bears to only make one third down attempt out of ten total and only 11 first downs the entire game.

Coming into this game after a 31-23 win over the NFC’s fourth seed, Washington’s Washington Football Team, the Buccaneers are out for revenge, especially after the 38-3 loss earlier in the season. However, in my opinion, Tampa Bay’s performance last week was less than exceptional; Brady was only 22/40 in pass attempts, and their defense allowed Washington’s technically third-string quarterback Taylor Heinicke to throw for 306 yards and almost make a comeback. With this aside, Tampa Bay’s offense is a force to be reckoned with, as they have many talented players such as Rob Gronkowski, Mike Evans, Antonio Brown, and, of course, Brady himself. They are also running on a five-game winning streak, including the postseason win against Washington. Only time will tell how these two teams match up, I just hope it’s the Saints who end up on top.

Although many have already placed their bets on who will win this week, next week, and even the Super Bowl, it’s important to remember that in the playoffs anything can happen, just look at last week’s game between the Cleveland Browns and the Pittsburgh Steelers.

THE STINGER • Copyright 2023 • FLEX WordPress Theme by SNO • Log in