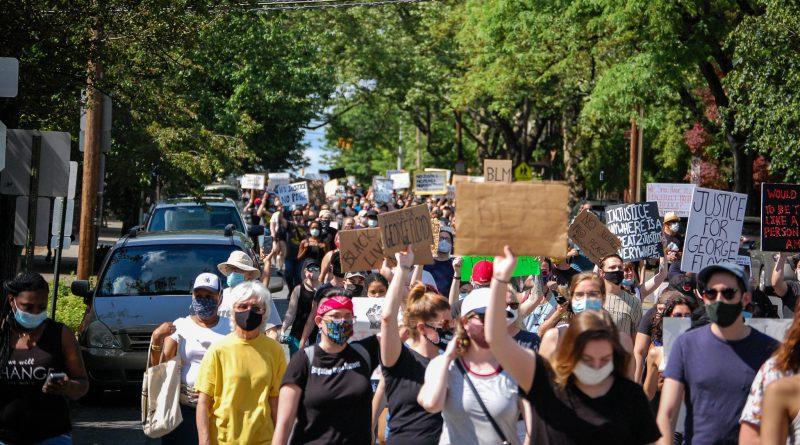 This past weekend, demonstrators in Bethlehem, Allentown, and Easton came together to protest and call for an end to police brutality in America.

The recent rise in outrage follows the killing of George Floyd, an unarmed black man from Minneapolis, at the hands of a police officer. Floyd’s death has since sparked outrage across the nation, with petitions flooding social media and various riots and protests forming in major cities. In an effort to support the greater Black Lives Matter cause, residents of the Lehigh Valley organized multiple events, with two taking place in Bethlehem and Allentown on May 30 and one in Easton on May 31.

The demonstration in Bethlehem began at 3 p.m. in Rose Garden Park. As the event organizers took to the stage, protesters with signs boasting various slogans quickly gathered. Many, as per state recommendations, wore face masks.

In their speeches, organizers encouraged attendees to speak up against racism in their everyday lives, as well as emphasizing the importance of registering to vote.

The initial organizer of the event, 2017 Liberty High School graduate Matty Fall, began planning the event only a day before; her anger over Floyd’s death fueled her the entire way.

“[What happened to George Floyd] was a racially motivated murder and it keeps happening again, and again, and again to my black brothers and sisters,” Fall said in her speech. “And I’m tired.”

Fall, who is currently studying criminal justice at John Jay College of Criminal Justice in New York City, did not expect the overwhelming turnout of the event.

“I whipped up a little poster and spread it everywhere we thought anybody could see it,” Fall said. “I thought maybe 30, 40 people maybe and that would’ve been enough by me.”

Instead, hundreds of supporters filled the streets of Bethlehem as they marched toward Bethlehem Public Library. Chants of “Black Lives Matter,” “no justice, no peace,” and “I can’t breathe,” echoed through the crowd, which stretched for blocks. Many passersby in cars and on sidewalks honked or cheered in support, while volunteers passed out water bottles.

Cyndria Pugh, a protester and a friend of the event’s organizers, marveled at the march’s turnout.

“I’m not from around here, but just seeing the amount of people that came out,” Pugh said. “Like, this started yesterday. And seeing how many people came out from around here — it’s amazing to see the town unite as one and be able to do this. It’s beautiful. I hope that more people as we’re walking can see it and maybe they’ll stop and they’ll join, or maybe they’ll just know more now and they’ll see that it’s okay to do this. It’s perfectly fine, it’s normal. We’re supposed to do this, we’re supposed to all care for each other and stand up for each other.”

Another protester, Bethlehem Catholic High School student Nicholas Abi-Daher, agrees with the importance of showing unity as a community.

“I think it’ll show the community that we’re able to come together regardless of race,” Abi-Daher said. “We can stick together for what’s right and show that we can overcome adversity.”

Once reaching Bethlehem Public Library, demonstrators gathered once more and continued to shout chants, as well as Floyd’s name. The Bethlehem Police began to block off roads leading to the protest and assisted stuck vehicles in turning around, but their appearance did not lead to any violence.

Scott Meixell, the Bethlehem deputy chief of police, was satisfied with the peaceful way in which the protest played out and was handled.

“Everybody was peaceful here, so it’s fine,” Meixell said. “That’s what we like to see. It’s unfortunate what happened in Minneapolis. We always do extensive training — constant training is how we prevent something like [George Floyd’s] death from happening. Being peaceful is the best way to be heard, your message gets clouded when you get violent.”

Many of the protesters, including Abi-Daher, were inspired to attend by a deep feeling of unjustness.

“Enough is enough,” Abi-Daher said. “We need to show unity across the nation, as you can see all around the country people are gathering. Let their voices be heard so we can actually put an end to racism or do as much as we can. I came out here personally today because I think what happened is sick overall. It’s just a horrible thing.”

This feeling of unfairness spreads, as well, to white allies. Charles Bingham, who attends Moravian Academy, desired to use his privilege to support the black community.

“I think what was done to George Floyd and the countless other victims of the corrupt police system and police brutality needs to be stopped,” Bingham said. “It was very wrong of the police officer and the others who stood watching him [kneel on Floyd’s neck]. I came today to show my support for the black community. I’m not black so I can’t understand how they feel, but I can use my privilege of being white to be heard … I recognize and want to help the black community during this time.”

Protest organizers hoped that the march would lead to local change within the Bethlehem precinct. Greater change to police forces nationwide seems to be a sentiment shared by demonstrators across the country.

Pugh, as well as the leaders of the Bethlehem march, encourage Lehigh Valley residents to do all they can in support of movements protesting against racism and police brutality.

“It’s not fair that people are standing by and just ignoring it,” Pugh said. “Even if they know about it, some people are just being oblivious to the fact that it’s going on and we will never be completely equal until everybody stands together as one. In general, for America, it’s ‘America the free and the equal.’ We will never be that unless we all stand together as one and come together united.” 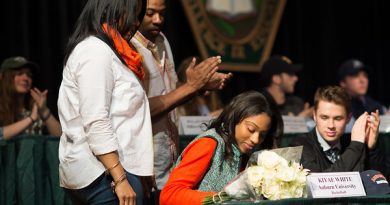